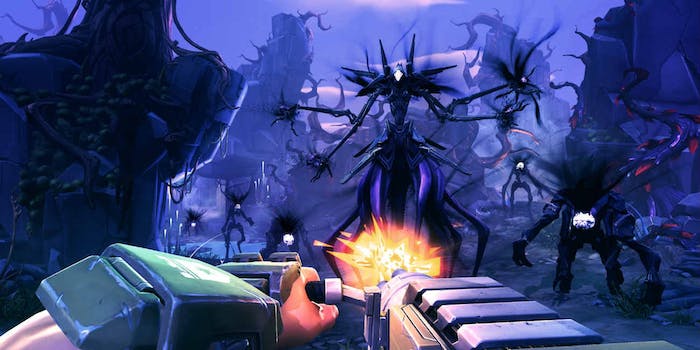 Check out the first gameplay video for genre-blending Battleborn

Gearbox is heading into new territory.

The developers of Borderlands are trying to demonstrate that unlike other recent efforts, blending genres does not have to result in a hot mess.

On Wednesday we shared our first look at Battleborn, the new game from Gearbox Software that blends first-person shooters and multiplayer online battle arenas (MOBAs) like League of Legends, or Dota 2. Gearbox is calling Battleborn a “hero-shooter” for its focus on single characters that players can level up within the space of a single battle.

Gearbox’s past success with genre blending suggests it has what it takes to pull this off.

Borderlands was a blend of first person-shooters and role-playing games. The moment-to-moment play was about shooting the living hell out of human renegades and soldiers and robots and monsters with a ridiculous amount of unique weaponry. Characters accrued experience points and leveled up with new powers, which were RPG elements, and the combination of genres was highly effective.

As we learned in New York City this week, Battleborn is going to feature a cooperative campaign and a player-versus-player mode. Today, Gearbox released a new video that shows off Battleborn’s campaign mode.

Head straight to 4:28 if you want to skip the marketing intro and see the game in action. The art is cartoony. Some of it looks straight out of a Disney movie, but animations are extremely smooth.

The little robots our heroes are slaughtering would be the “creeps” in the MOBA comparison, or weak foot soldiers that more or less get in your character’s way on route to an objective that needs destroying. One of the characters refers to them as “minions,” which is nomenclature borrowed from League of Legends. The developers talk about “ultimate powers,” another clear reference to MOBA mechanics.

We also see a purely defensive standoff, which is not familiar to MOBA play, where defense is more like waiting for a weakness to launch a counterattack. For better or worse, this sort of analysis is what will likely dominate preview coverage of Battleborn, but at least Gearbox is being upfront about what they’re trying to achieve with the game.

Battleborn will be released on the PC, Playstation 4, Xbox One, and PC, sometime in 2015.