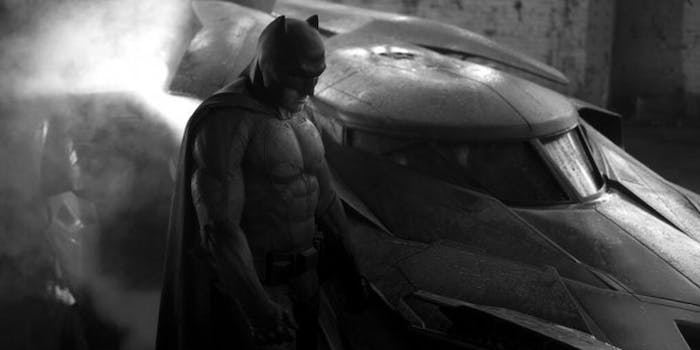 It's a classic return from the 'Dark Knight' tank.

Man of Steel director Zack Snyder teased a twitpic of the new Batmobile on Monday afternoon, and now he’s posted a photo of the real thing.

We know it’s a photo rather than CGI, because Snyder made certain to mention the make and model of the camera he used. Hipster authenticity or product placement? It doesn’t really matter, because all anyone cares about is the Batmobile itself, which looks… black, and sort of car-shaped. We’ll leave any further analysis to the experts.

The photo also gives us our first look at Batfleck’s costume, complete with weirdly realistic sculpted muscle armor and cute little bat ears on the Batman cowl. We probably won’t be seeing anything of substance for a few more months, as Snyder’s untitled Batman/Superman movie isn’t out until 2016.

All we know for now is that the new Batmobile looks considerably more streamlined than the tank-like “Tumbler” from the Christopher Nolan movies, and that Ben Affleck’s Batman ears are simply adorable.