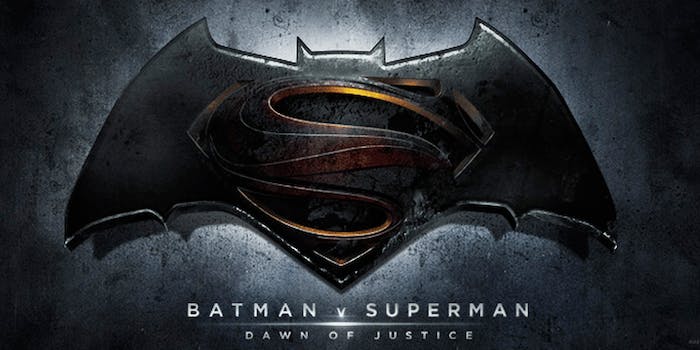 Still no justice for fans who want to see the movie franchise rise above DC's increasingly tarnished reputation.

It’s getting increasingly difficult for superhero fans to pry apart their issues with the beleaguered DC Comics from the film production team that’s currently helming its limpest franchise.

But at least now they know what to call it when they’re placing the blame. Yesterday Warner Bros revealed the highly anticipated title of the new Justice League movie—and it’s just as lackluster as everything else you’ve come to expect from the franchise.

Batman vs Superman: Dawn of Justice is as anvilicious as everything else we’ve come to expect from the series of DC films that kicked off with Man of Steel.

SUPERMAN/BATMAN EVENT FILM 2016 would have been a better and more honest title.

The choice seemed to receive universal bafflement from fans, who immediately devolved into making terrible legal and dishwashing soap jokes, in addition to debating the merits of putting Batman before Superman in the title.

Triggered the emergency stop on my tube so I could tell the passengers about Dawn Of Justice. The driver said it was the right thing to do.

We’re all just sitting now, staring at each other in stunned silence. One man in a suit and bike helmet has tears running down his cheeks.

Though DC Comics is only loosely connected to the film franchise based off its two flagship superheroes, it’s hard not to see this as par for the course. After all, this is the same legendary comics publisher so beleaguered in recent years for its terrible choices, ingrained sexism, inability to keep up with the more exuberant Marvel, and stubborn refusal to give fans a Wonder Woman movie that it now has its own watchdog site to keep track of its PR flubs and unpopular decisions.

That tarnished reputation also bleeds into the track record for the recent film franchise. Man of Steel drew mixed reviews from critics, and earlier this week, the series’ screenwriter David Goyer came under fire for weirdly mischaracterizing Marvel’s She-Hulk character as a male sex fantasy instead of a feminist icon designed to appeal to female comics fans.

Taken by itself, “Dawn of Justice” probably wouldn’t have seemed like such a terrible title, but combined with the misgivings fans had about DC’s haste to compete with Marvel and the choice of 300‘s director Zach Snyder to helm the franchise, it seems to indicate more of the same weighty self-importance that made Man of Steel only the 10th most successful superhero film .

And seriously: Dawn of Justice? Why not just call it “Look, we have to do this Justice League thing, but we don’t have to like it.” Not to mention the new logo looks like something you sketched on your Trapper Keeper in 6th grade.

Principle photography on Batman vs Superman: Dawn of Justice (see, once you start saying it, you can’t not say the whole title—it’s like the film title equivalent of a train wreck) began yesterday.