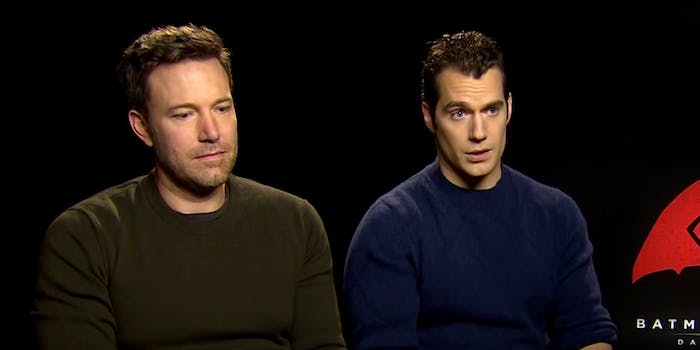 Sad Affleck is the meme we needed after ‘Batman v Superman’

His face said it all.

We’ve reached the point in the long and arduous superhero movie press tour where the actors are asked to atone for the many, many negative reviews the movie has received from film critics. And Ben Affleck’s nonverbal response to Batman v Superman’s terrible reviews is better than anything he could’ve said.

Affleck and Henry Cavill were asked about the critical reviews during a video interview with Yahoo UK on Thursday, and Cavill gave a perfectly diplomatic response about how what really mattered is what the audience thought about it. Affleck stayed mostly silent while Cavill spoke, only uttering an “I agree” when prompted by the reporter. But his face told a much different story.

Once somebody added “The Sound of Silence” to the clip like something straight out of Arrested Development, Sad Affleck was born. Who would’ve thought that Sad Batman would’ve come full circle?

And soon the remixes and responses followed.

If we look back at the clip, we could’ve easily foreseen this. The signs were there even before Cavill started to respond. They must’ve known this was coming.

The exact moment they realize they'll have to talk about the reviews https://t.co/kn0VTpCsyz #BatmanvsSuperman pic.twitter.com/AUdkKsXwpw

In the midst of the false conspiracy that critics were paid off to write negative reviews, a lot of attention and weight has been placed on Batman v Superman’s Rotten Tomatoes score; as of press time, it’s certified rotten at 30 percent, although that number will likely change as more people see and review it. The score is surprising to some, mostly because other memorably terrible films have scored higher than Batman v Superman.

#Daredevil has a higher rating on @RottenTomatoes than #BatmanvsSuperman Michigan should ask for their $35M back. pic.twitter.com/BlHg3irSEI

While the original remix video featured “The Sound of Silence,” another musical staple that portrays the essence of “what have I done” was soon added.

That moment when you realize your Batman movie is getting worse reviews than your Daredevil movie pic.twitter.com/ebHvaPvyqT

And if you thought the Crying Jordan meme was reserved only for athletes and their fans during a devastating loss, you haven’t witnessed the star of a major blockbuster have a somber moment of clarity.

. @jose_ferreira44 I have not but I’m so ready for this. pic.twitter.com/PKsNu64Fau

Affleck was on The Tonight Show Thursday night and played a game where he and Jimmy Fallon were awarded puppies for correct answers, and even then he couldn’t entirely shake things off. If puppies can’t help Sad Affleck, nothing will.

You know it's bad when you're holding a puppy and you're still #SadAffleck pic.twitter.com/nxC5tz7kCF