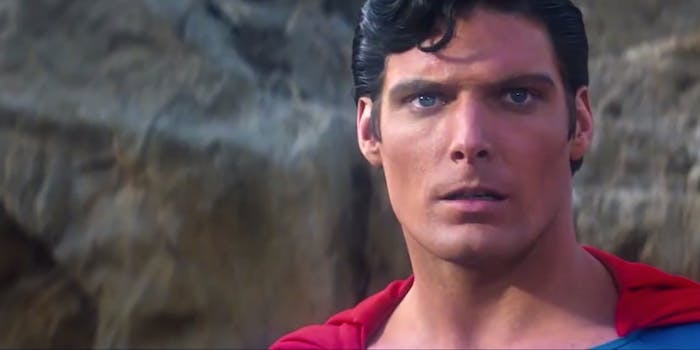 We enjoyed this so much more than the actual trailer.

In the three days since the Batman v Superman trailer leaked, we’ve been treated to an endless stream of remixes, mashups, and parodies.

We’re honestly not sure whether this latest mashup is homage or parody or both, but YouTube user Bobby Burn’s decision to swap in the actors for their vintage counterparts does reveal the logical fallacy that grows increasingly evident in every DC Comics film: Ultimately, there’s only so much hammy acting, overblown orchestral arrangements, and dark lighting you can use to disguise the fact that your gritty, pompous film is actually just about comics.

Watching Christopher Reeve as Superman and Adam West and Burt Ward as Batman and Robin makes it abundantly clear that Warner Bros.’s rumored “no jokes” policy about its DC franchises is based on some kind of magical thinking where the heroes never wore full-body leotards and their underwear on the outside.

If superheroes represent the best of humanity, then surely they’re allowed to be just a little bit ridiculous, too. A Justice League that can’t laugh at itself is not a Justice League I want to watch for another umpteen movies.

Oh, well. There’s always reruns of the glory days of Christopher Reeve’s Superman—a man who once used a mountaintop to cork a volcano.