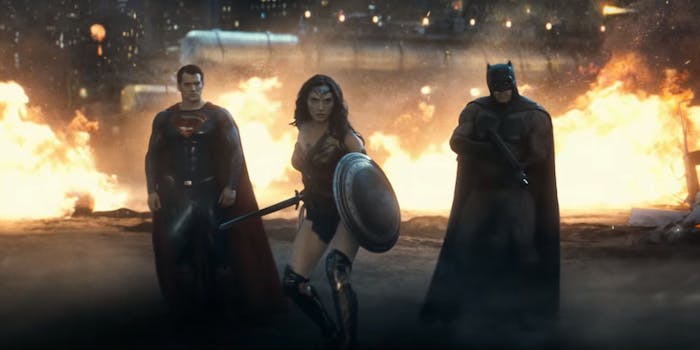 The new Batman v Superman trailer introduces a new dimension to the rivalry between the two title characters—namely, that their civilian alter-egos cross paths before either hero knows the other’s secret identity.

In a scene straight out of fanfic, Bruce Wayne and Clark Kent meet at a swanky party and glower meaningfully at each other, only to be interrupted by Jesse Eisenberg’s frenetically perky Lex Luthor.

We also get a better idea of Wonder Woman‘s role in the conflict: a neutral figure who doesn’t seem to be siding with Batman or Superman—yet. Too bad she doesn’t actually get to speak a line of dialogue on her own behalf.

The trailer’s biggest revelation was the presence of the DC Comics supervillain Doomsday, who looks kind of like a Teenage Mutant Ninja Turtle on steroids. One scene with Lex Luthor and the body of Zod (the villain from Man of Steel) strongly implies that Superman’s old Kryptonian enemy may provide the Frankenstein-esque source material for Luthor to build Doomsday.

For the most part, Batman v Superman‘s plot still remains a mystery—including the scenes where Superman appears to act a bit like a supervillain himself. It looks like fans may have to wait until release day to find out if those are part of a dream sequence—or if Superman really is as dangerous as Bruce Wayne fears.