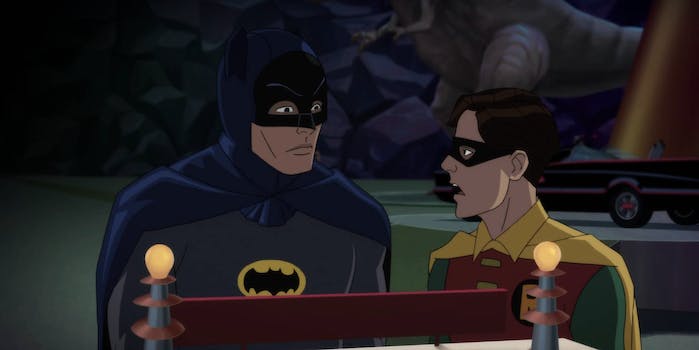 Now here's a Batman we haven't seen in while.

Warning: This review contains minor spoilers for Batman: Return of the Caped Crusaders.

Batman is having a bit of an identity crisis.

Frank Miller’s run of ’80s Batman comics inspired many modern Batman film adaptations and set the serious tone of the movies as they looked at the hero’s dark past and the complicated line between good and evil. While those movies still boom at the box office, the darker superhero fare is facing growing backlash from fans and critics who want something lighter.

Original Batman cast members Adam West, Burt Ward, and Julie Newmar reprise their roles as Batman, Robin, and Catwoman for Batman: Return of the Caped Crusaders, the latest animated film from Warner Bros. and DC Entertainment that premiered at New York Comic Con last week. It’s not a continuation of the TV series that first brought Batman to our screens 50 years ago (nor the DC series, which occurs in the same universe), but it embodies the spirit that made the series so endearing over the years.

ROTCC centers on a supervillain team of the Joker, the Penguin, the Riddler, and Catwoman aiming to wreak havoc and take over Gotham with as much flair and as many puns as possible. But along the way, we learn more about Batman than we might expect from a show known for its “Holy fill-in-the-blanks” dialogue and action scenes packed with whams and pows.

(At one point, Batman and Catwoman even poke fun at the ending of The Dark Knight Rises in a on-the-noise bit of meta humor.)

In the film, written by Michael Jelenic and James Tucker, Batman is still a straitlaced rule-abider who keeps crime in Gotham at bay—even to the point of using a sidewalk to avoid jaywalking—while dutiful sidekick Robin constantly and earnestly trains to be the best he can. Catwoman is still on her own side, willing to team up with whoever gives her the better deal, and she’s pretty much always the smartest person in the room no matter who she’s facing, although some of her characterization is thinner than Batman and Robin’s.

The leaps they make to solve mysteries are still in full effect, but instead of trying to make sense of just how prepared Batman is or how little sense the solution makes, you can just sit back and enjoy the fun.

It also gives us a glimpse into what kind of Darker Knight this Batman would be to grim and hilarious effect, which makes his particular attention to lawfulness a little less silly. And not only does he have a gadget for every possible scenario, he also has a ready-made plan.

While it still has that iconic ’60s feel, there are a few notable updates. It was revealed at NYCC that William Shatner will be voicing Two-Face—a character who never appeared in the West-led series.

Batman: Return of the Caped Crusaders is now available digitally and will be out on DVD and Blu-ray on Nov. 1.