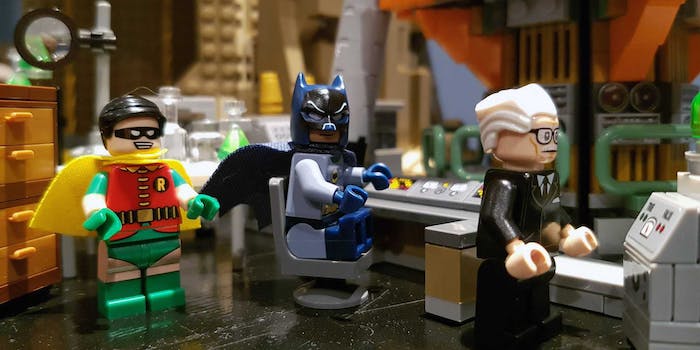 Holy retro Batcave, Batman! Lego’s new Bat-set takes us back to the ’60s

Wait until you see that sweet Lego Batmobile.

Remember when Batman was colorful and cheery? Lego does, which is why the timing of its new classic TV Batcave is so good. With the dour Batman v. Superman: Dawn of Justice hitting theaters, it’s perhaps the perfect Bat-time for a dose of Bat-levity.

Younger fans probably don’t remember the classic TV series, which aired for three seasons between 1966 and 1968. It was a far cry from Christopher Nolan’s gritty Dark Knight movies, and instead explored new heights of camp and cheesiness.

Batman and Robin lectured bad guys on proper manners. Their comically choreographed tag-team fights against villains were punctuated by cartoonish “Pow!” and “Bang!” on-screen pop-ups. Henchmen were identified by the word “henchman” stenciled on their turtlenecks. In the movie spinoff from the show, the Dynamic Duo even fended off an obviously rubber shark with the Shark Repellent Bat Spray they conveniently had stashed in their Bat Copter. Many of the plots unfolded in the Batcave, the duo’s lair beneath stately Wayne Manor, where they examined clues and unravelled mysteries. It’s also where Adam West, as the titular character, took liberties with speech cadence and sentence syntax. Holy over-enunciation, Batman! The Lego Batcave’s highlights are definitely the trio of included vehicles. The Bat Copter, with its bat-wing fins, bubble dome cockpit and bright red colors scream 1960s. There’s perhaps no better reminder of how much the Batman aesthetic has changed over the years, considering the hero’s current spate of black stealth fighter-inspired aircraft. The Bat Cycle with attendant sidecar is also a reminder of how Robin used to be treated as the subservient sidekick, rather than as a fully developed character. Nowadays, he’s his own man and gets his own damn motorcycle, but back then he just couldn’t be trusted. It’s a statement on teen rights in general. The Batmobile is almost worth the set’s $269 price tag alone. Still a staple of comic conventions today, the classic vehicle is punctuated by its rear fins, bubble windshields and rear jet engine. There’s also ample trunk space to store Batarangs and grappling hooks, which Batman and Robin can use to scale buildings—although if you watched the show, you know they were simply walking on the floor with the camera turned sideways.

Like the copter, it’s a throwback to when Batman was purer fun, and not quite so military chic. Another highlight is the wealth of included mini-figures. Batman and Robin are naturals, but there’s also their Bruce Wayne and Dick Grayson alter-egos, decked out in their respective leisure suit and cardigan-wearing glory. Again, so ’60s.

There’s also Alfred the butler, who in those days was a loyal servant rather than the annoying nag that Michael Caine turned him into. Batman’s rogues gallery is well-represented, with the Joker, Penguin, Riddler and Catwoman making up a fearsome foursome. As with the vehicles, the villains are reflections of how far society and pop culture have come—or haven’t—over the past half-century.

The Joker wears—gasp!—a pink suit, which is considerably cheerier than the drab dark purple immortalized by the departed Heath Ledger in The Dark Knight. The Joker of the ’60s, played by Cesar Romero, was more of a mischievous clown than the scary psychopath he is today.

Similarly, it’s telling that the current generation of movies haven’t taken a stab at the Riddler yet. Played mainly by Frank Gorshin in the TV series, the Riddler was a goof with a penchant for puzzles and a maniacal laugh. Jim Carrey played him much the same way in the 1995 film Batman Forever, so his continued absence suggests the character may still be too associated with campiness for any director to take a chance.

Catwoman, played by Julie Newman and Eartha Kitt in the show, was TV’s biggest ’60s sexpot—and sadly, she hasn’t advanced much beyond that on the big screen in recent times. It may be a function of the character, where it’s just too hard to make a woman in a leather catsuit un-sexy, but it’s an issue nevertheless. Someone somewhere should try to bring a Catwoman to life on screen in a way where sexiness isn’t her main attribute. The Batcave itself is composed of three connecting modules and has some attractions, but also misses a few opportunities. The central tower-like structure holds the most appeal, with Wayne Manor’s study on top housing a sliding bookcase that reveals the fire poles to the cave below. As in the show, the poles are labelled “Bruce” and “Dick,” just so there’s no confusion about who slides down which. Exactly how they change into costume while sliding down unfortunately remains unexplained. Rounding out the cave are the various lab instruments, shelving units and computers, which themselves are comical in retrospect. It’s hard to believe that Batman could easily replace all those large mainframes today with a simple smartphone.

There’s one glaring error with the instruments and computers, though: They’re not labelled. In the TV show, every device and item in the cave had a handy sign to go with it to explain what it was for, but that’s lacking here. Without such signage, how are we to know the Interdigital Sorter Bat Crime Computer from the Film Developing Tank (Super Fine Batgrain)?

It’s a missed chance by Lego designers to easily add authenticity to the Lego Batcave, which is too bad because it otherwise accurately captures the camp of color of the original TV show.

Perhaps those are additions that can be made at another Bat-time, on another Bat-channel.