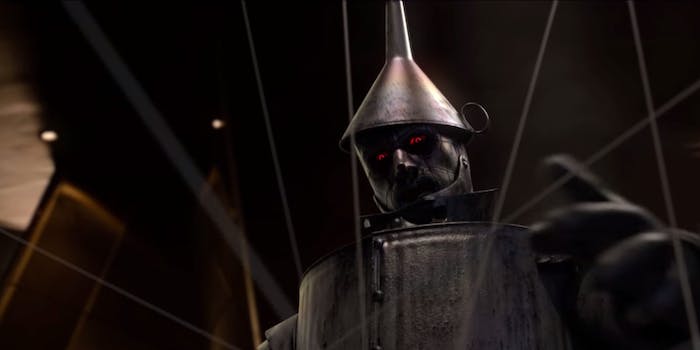 Hilarious parody mashes up ‘Avengers: Age of Ultron’ and ‘The Wizard of Oz’

This Tin Man really has no heart.

In a hilarious mashup from YouTuber Darren Wallace, we see exactly what would happen if Ultron had chosen not to infiltrate a robotic exoskeleton and instead took over something from an equally terrifying universe: the Tin Man from The Wizard of Oz.

James Spader’s haunting spiel from Avengers: Age of Ultron gets hilarious new life in this video, which also recasts Thor (Cowardly Lion), Captain America (Scarecrow), and even Scarlet Witch (fittingly, the Wicked Witch of the West). Together, our heroes have a serious axe to grind against the Tin Man and must assemble to send the heartless bastard back over the rainbow.

Toto, we’re not in Asgard anymore.