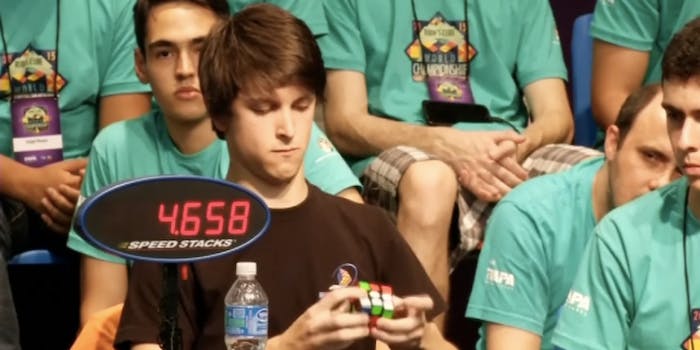 Teen solves Rubik’s Cube in under six seconds, is probably a god

Our own unfinished Rubik's Cubes are green with envy.

Most of us couldn’t complete a Rubik’s Cube without cheating, but Feliks Zemdegs did it in just six seconds, an almost godlike record for such a complex task.

The Australian teen won his second Rubik’s Cube World Championship in a row in Sao Paulo, Brazil, over the weekend, completing a 3x3x3 cube in 5.69 seconds, just under the world record.

His moves are practically seamless, and the video certainly has us looking over at our own Rubik’s Cubes with envy.

His sigh of relief after completing the task is one well-deserved sound.

“The win was also really nice as well,” Zemdegs said. “Because I won last time, I was sort of less nervous this time because I had already won one so that sort of helped a bit, but yeah it was obviously really cool.”