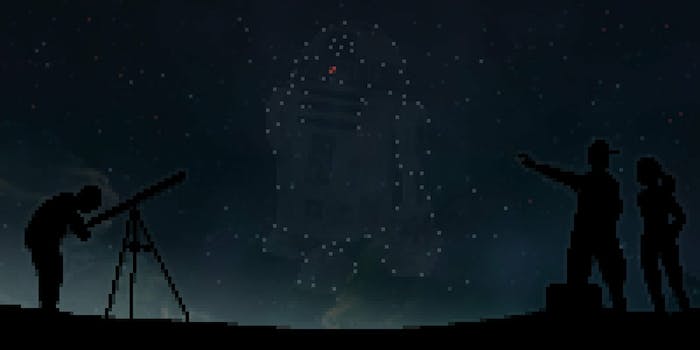 Can Star Wars defend its take on astrophysics and other elements of space science? Not really—but that doesn’t stop science geeks from loving it.

Chelsea Harris, an astronomy graduate student at the University of California, Berkeley, recently gathered her friends and classmates to watch the original theatrical releases of the original trilogy at Berkeley’s Campbell Hall. I joined them one Thursday night for a nostalgic rewatch of Return of the Jedi.

It turns out watching Star Wars with a group of astronomy and physics students is a fast track to understanding what parts of the films don’t hold up to advanced scientific inquiry.

Harris, who fancies herself a Star Wars nerd, told the Daily Dot she grew up with the franchise. Though it didn’t influence her decision to become an astronomer, she and the other scientists had plenty of thoughts about the franchise’s scientific accuracy. On the eve of The Force Awakens, we spoke to them about some of the more advanced aspects of the Star Wars franchise—including what it gets totally wrong, and surprisingly, some things it gets right.

Spaceships don’t fall down when they get hit

We shouldn’t really need a room of science geeks to point this out, but it helps. “It’s weird the spaceships fall down when they get hit,” one Berkeley student told us to immediate laughter from the group.

That’s right. Gravity’s not really a thing in space. Even when the ships are fighting above a planet, it doesn’t make sense that a ship would suddenly fall straight down toward the planet as if it suddenly realized the planet has gravity. The ship should, if anything, be pushed in the direction of the impact.

“It’s interesting that they went the hyperspace route to me,” Harris said, referring to the method of long-distance travel used in the movie. All fictional media about space has to deal with the inconvenient matter that, in space, things are very far apart. So they come up with different solutions, such as the warp drive in Star Trek and hyperspace in Star Wars. Neil deGrasse Tyson thinks the Enterprise‘s version of space travel is more believable than the Millennium Falcon’s. Harris agrees.

So maybe hyperdrive isn’t the most practical way of crossing the galaxy; it still looks cool as the stars suddenly stretch and expand into little laser beams.

Harris also mentioned the same principle holds for asteroid fields—things in space are pretty far apart. An iconic and much-imitated moment in The Empire Strikes Back involves Han Solo threading between massive boulders in hurtling through the Hoth asteroid field. Realistically, that whole scene would be more like trying to walk through an empty parking lot without getting hit by a car.

Andy Howell, an astrophysicist at UC Santa Barbara and the man behind the new YouTube channel, Science vs. Cinema, broke it down further. If the asteroids were that close together, the planets in the galaxy wouldn’t even exist yet.

Planets form by a kind of snowballing effect, Howell explained to the Daily Dot in a phone interview. At a time when debris was that close together, the planets would still be in the formation process as bits of rock and matter impacted each other, eventually coalescing into a full-fledged planets.

There may have been a time when the galaxy far, far away had such asteroid fields, but creatures driving around in fancy spaceships wouldn’t have evolved yet.

Star Wars‘ famous dogfights in space are just totally out of this world, Howell said. Basically, in order to successfully fight with jets in space you would need crazy amounts of fuel.

Newton’s first law tells us an object in motion will stay in motion, so in space a craft could keep moving indefinitely—but only in one direction. In Earth’s atmosphere, particles in the air generate friction and provide airplanes something to bank off of and accelerate against. In space, however, banking and maneuvering require burning fuel to push yourself in the direction you want to go. It’s technically feasible—it’s just woefully impractical, Howell said.

Fuel in general seems to be an unbelievable non-issue, Harris said. She cited the example in Empire where Luke leaves Hoth with the plan to rendezvous with other rebels. But instead, Luke makes a trip to Dagobah to train with Yoda. Harris said presumably Luke must have had enough fuel to make the trip (and to leave Dagobah later, with no apparent problems after parking his X-wing in a swamp).

“Fueling space ships is one of the most difficult things about space ships,” Harris said. She also mentioned that it’s odd the ships have no problems entering and exiting the orbits and atmospheres of different planets.

“It’s the land of infinite fuel.”

So, is accuracy out the window?

“So, Star Wars is going for more of an emotional truth. They want things to just sort of feel right and move you in a certain way. Scientific accuracy is not at the top of the list of things it wants to achieve,” Howell said.

But Star Wars does have some connection to reality. Here are a few things we know the franchise got right.

Tatooine, with its dual-star system, is a believable planet, Howell said. He wrote about that connection, as well as other science-y aspects of Star Wars, on his blog.

“We’ve now found a few cases where there are circumbinary planets. Those are planets around a double-star system,” he said. “There are a lot of different configurations you can have, but one is you can find two stars and then you can have planets orbiting around that.”

In simpler terms, a planet like Tatooine that orbits two stars does actually exist in the universe.

That’s about it for the accuracy of Star Wars, but Berkeley astrophysics student Abigail Polin told the Daily Dot there’s an interesting thing about those “pew pew” noises the lasers make. In reality, lasers don’t make a sound and even if they did, you wouldn’t be able to hear them in space—sound doesn’t travel in a vacuum. But the sound effect of the lasers in Star Wars are an example of Faraday rotation where high frequency waves travel faster than low frequency waves.

Here Polin explains the Faraday Rotation through the Star Wars sound effects—and the brave sound engineer who beat a radio tower to death to generate them. (Skip to 8:17 for the Star Wars section.)

At least the TIE fighters have a hint of reality. They run on twin ion engines—technology we actually have today.

“You basically ionize gas, and then you use it to accelerate particles out of the back of some engine to create thrust,” Howell said. But it doesn’t produce much thrust; the acceleration builds slowly over time.

“If you told the 4-year-old me [seeing Star Wars for the first time] that when I was an adult we’d have some of this stuff,” Howell said, “I’d be floored.”

It’s about the story you’re telling

Both Howell and Harris said that the scientific inaccuracies have never gotten in the way of their appreciation for the movies.

The story of Star Wars is pretty different from other space stories. Take The Martian, for example. One is a pretty classic tale of the struggle between good and evil, the other is about using science to beat the odds and survive alone on Mars.

As such, Star Wars doesn’t require scientific accuracy because it’s not really about science. Any inaccuracies can be explained by technology that exists unseen in the Star Wars universe.

“The other thing I think of is how good astronomy would be in the Star Wars universe,” Harris said. “They would have already figured out everything about gravitational waves. If a supernova went off in their galaxy, they’d just zip over to the other side and they’d have all these 3-D images.”

“I’m really jealous of the computer on the Millennium Falcon.”

Howell, on the other hand, would rather just visit the cantina on Tatooine.

“I bet [Mos Eisley]’s a crazy place! They have all these different cultural experiences,” Howell mused. “They’d have totally different religion, ideas about astronomy and physics. Physics is a universal thing, so you’d have that in common.”

Howell said he’s interested to see if the science and technology is more developed in The Force Awakens.

“Science fiction fans are a lot savvier than they’ve ever been. Part of that is Star Wars’ own fault,” Howell said. The movie’s massive popularity inspired so much sci-fi in its wake that these days those fans are used to a higher standard of science.

“I still want the fantastical—I want the crazy places—but I want it to be informed by what we know.”

He’s hoping to see some gas giant planets and frozen rogue planets floating through space without a star, he said.

There’s no denying the universal appeal of the original Star Wars movies. Toward the end of the Jedi screening, an older professor approached, standing outside the classroom and watching through the window. Eventually he joined us and sat down for the last 15 minutes of the movie.

I glanced over at him at one point. The look on his face was nothing short of sheer joy and excitement—I would guess identical to his expression when he saw the movie for the first time.

And no amount of science can trump that movie magic.