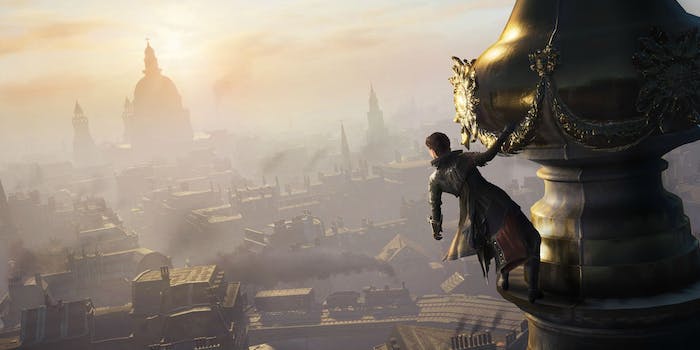 Ubisoft rebounds from 'Assassin's Creed Unity' with grace and style.

For all the many great things Assassin’s Creed Syndicate achieves, from the revamped use of A.I. companions to the well-conceived sibling dynamic of its two co-protagonists, what impresses me most about the latest addition to Ubisoft’s historical stealth franchise is how refined it is. 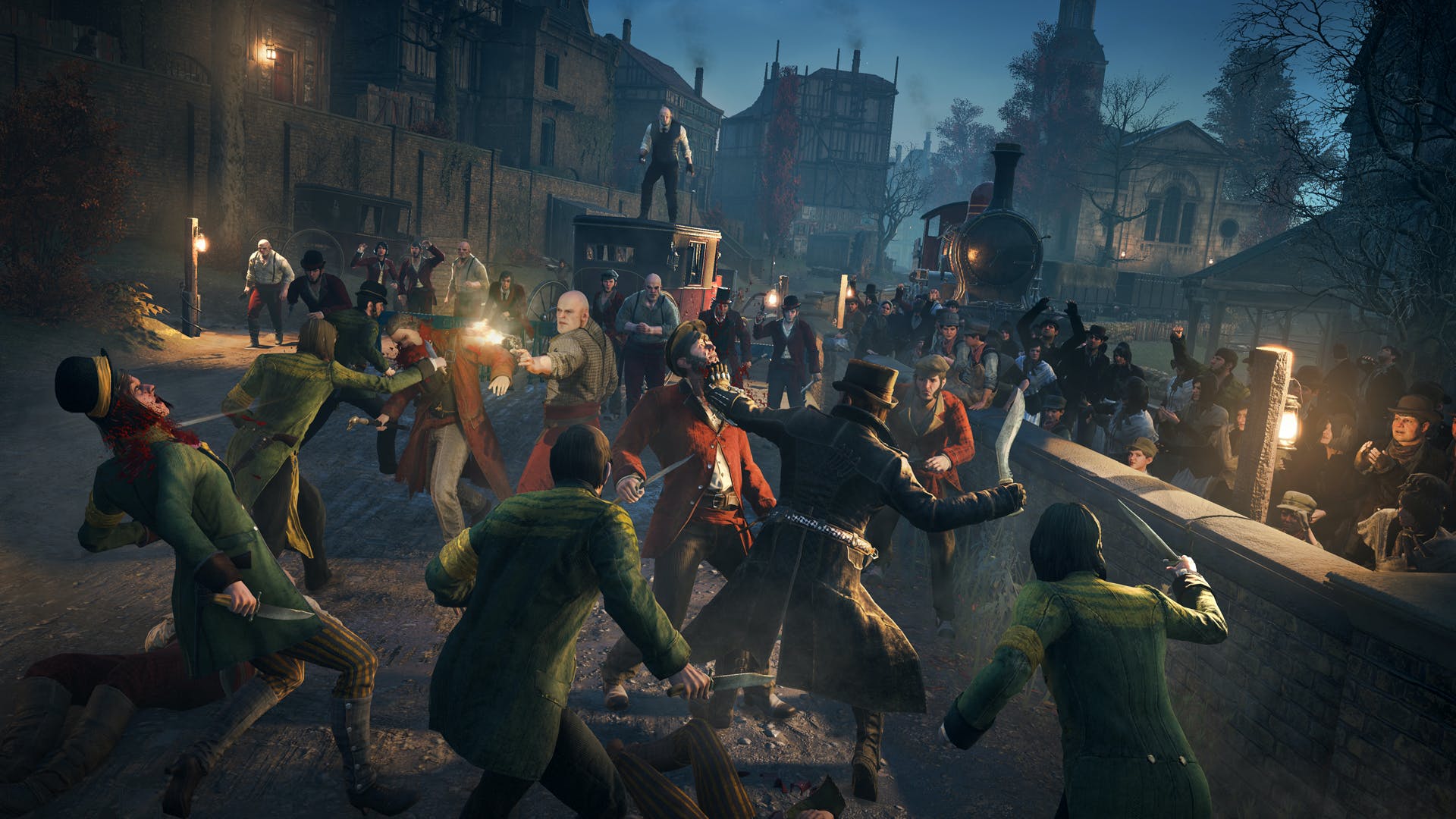 How will Syndicate be remembered? It will stand as the fat-trimmed Assassin’s Creed, an elegant chapter that clearly benefits from the lessons and feedback from all the Assassin Creeds before it.

Along with its refined design, there’s beauty in Syndicate’s conciseness and how effectively it communicates visual information right from the start. The initial exploration through the first factory tells you that child labor will play a significant part in both the game and the story. In equal measure, the modern-day introductory cutscene quickly and effectively introduces the main Templar target of Syndicate, the industrious Crawford Starrick. This establishes the game as a key narrative bridge between the past and present. As a capitalist in the most ruthless sense, Starrick helps give root to the modern version of the Templars, a sort of prototypical version of Abstergo Industries before the conglomerate’s founding in the early 20th century. 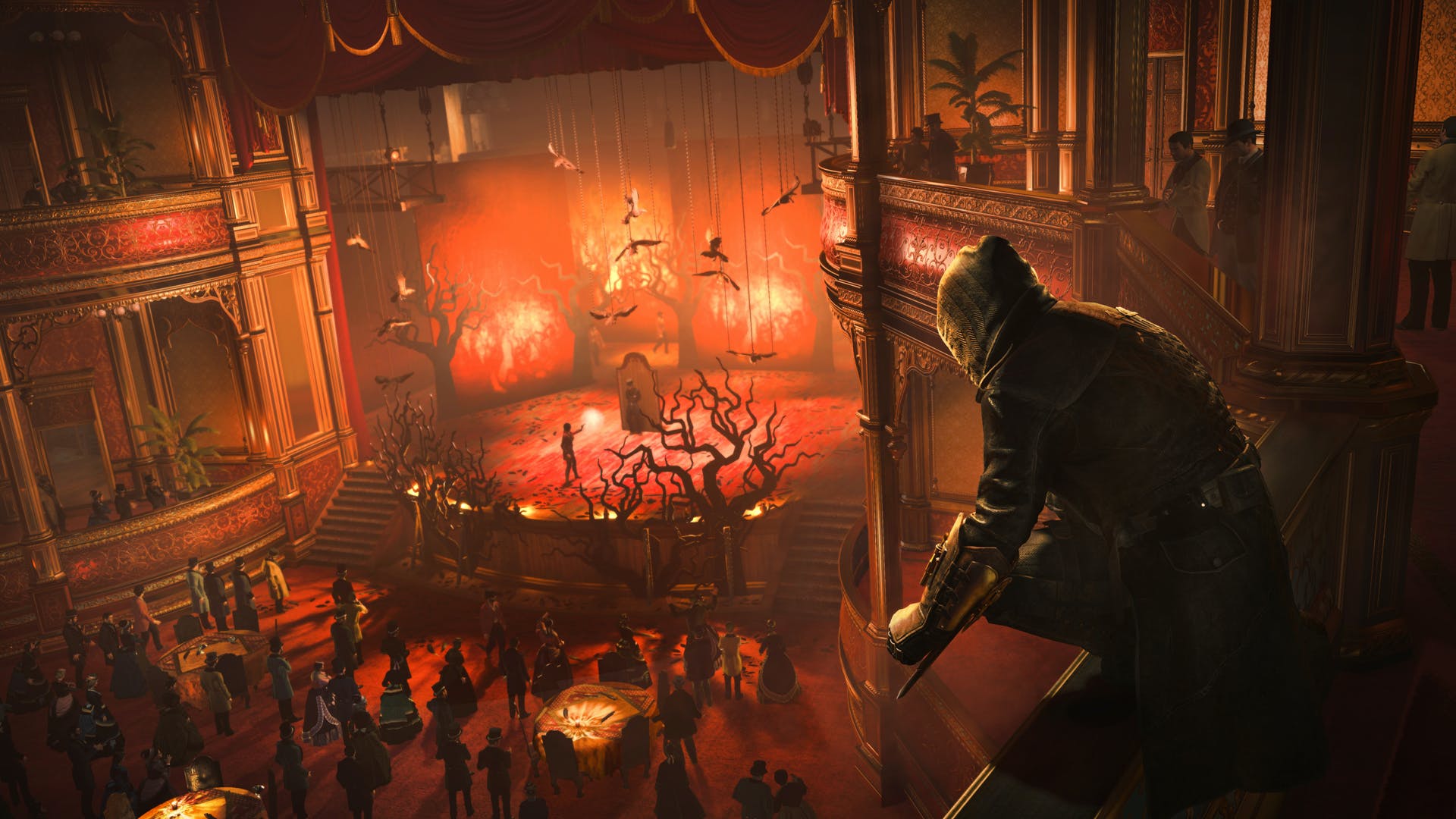 The twins you control in Syndicate, Jacob and Evie Frye, are the ideal assassins needed to overthrow Starrick and the Templar-led establishment that rules London. In their early 20s, these twins are at the key juncture where youth and experience meet. Their transition as accomplished, restless assassins in the South London borough of Croydon compels them to take their talents to London proper. There’s a freshness to their assertive ways, a contrast to the slow burn of Ezio Auditore’s indoctrination into the Assassin brotherhood back in ACII. In less than an hour into Syndicate, they’re already in London, prepared to take over the city.

Ubisoft’s vision of 1860s London is a believable, engrossing world, awash in signs and posters of fictional brands, back when advertising was starting to mature. It’s greatly reminiscent of the colorful and imaginative ads that decorate the even more fictional floating land of Columbia in Bioshock Infinite. The Victorian Era has always been fertile ground for storytelling. The growth of London as one of the first modern cities makes the time period relatable, while its 150-year distance from the present makes it ripe for countless make-believe urban tales. As an Assassin’s Creed setting, the time and place was inevitable. This London is vibrantly more alive than Unity’s Paris ever was, despite the countless A.I. characters who populated the latter. 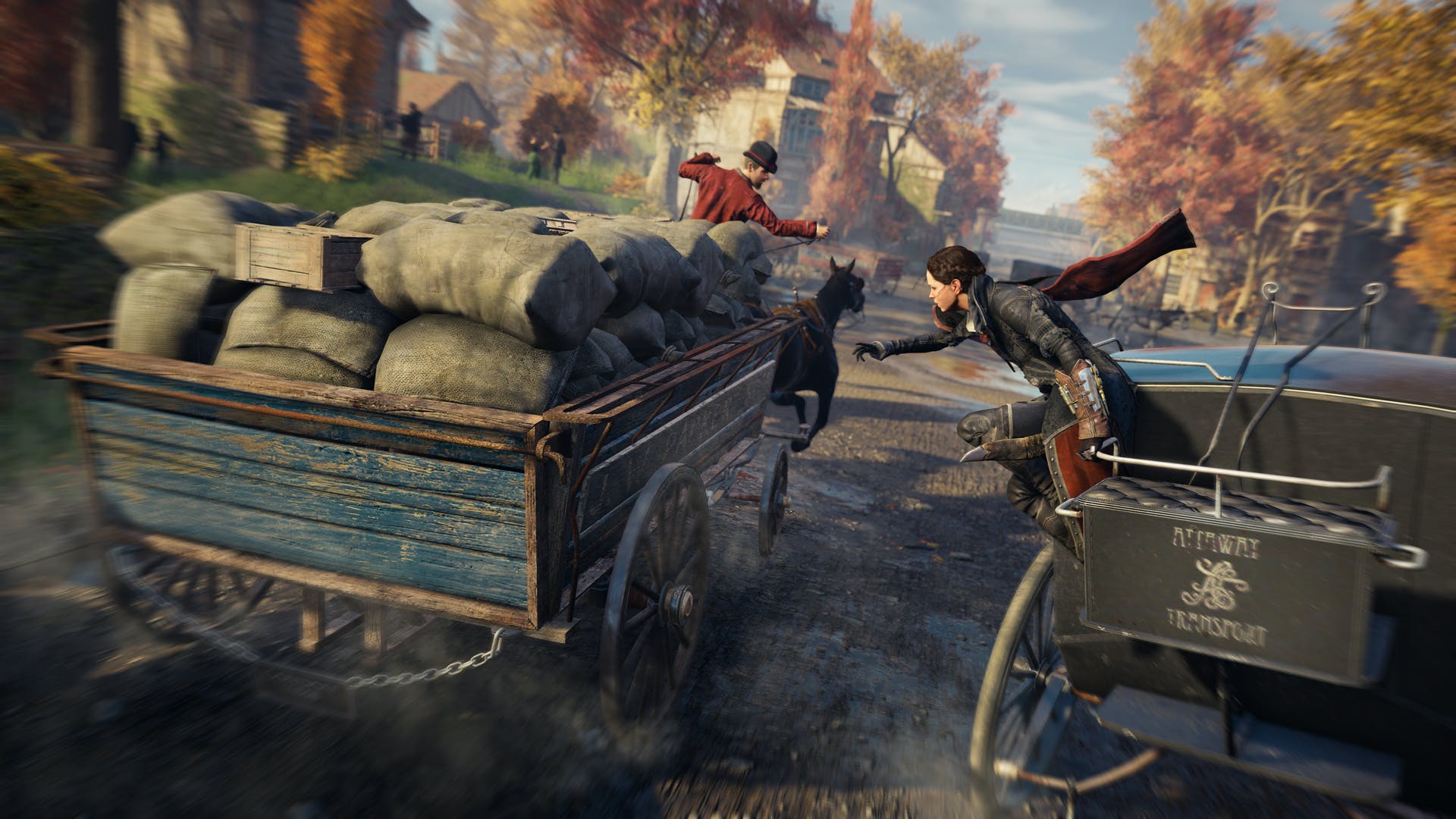 The best games in the series place equal value in the story content and the open world, compelling you to progress through both. Syndicate’s London is so inviting that putting off the mainline missions is never a problem. And when you do immerse yourself in the underbelly of the city, welcome distractions and diversions abound. Interactions with historical figures like Charles Dickens and Alexander Graham Bell are the catalysts of much of the optional content. It’s similar to the side missions in Unity; the difference is that the engrossing designs of London make these non-essential assignments all the more inviting.

Syndicate’s missions feel like a natural evolution from the multi-path infiltration designs of Unity. Gone are the obtuse pre-mission cutscenes where you’re in the mind of the assassin as he considers all the points of entry. Now the game just tells you flat out by using icons. This might be considered hand-holding, but since the game already places enough sensory demands on you (enemy tracking, sneaking paths, etc.), the infiltration icons hardly nerf the overall experience. It’s a kind of selective immersion breaking that helps retain Syndicate’s ‘gamey’ feel. You also see this in the skills tracking. Every type of kill is logged, whether it’s an assassination using blind cover or a ranged knife kill. This in itself creates an additional game within the mission. You’re incentivized to mix up your kills across your playthrough, gaining added experience for both twins along the way. This is an inventive method of training that goes beyond the initial chapters. You’re incentivized to attempt lethal moves that might be outside your comfort zone, which in turn makes you a better, more well-rounded killer.

If last year’s Watch Dogs represented the blandness that can arise from the homogenization of Ubisoft’s stealth-driven open-world games, Syndicate shows the benefits of the developer/publisher’s shared systems. For as much as Syndicate is an Assassin’s Creed game through and through, there are shades of Splinter Cell in the polished sneaking component. Those point-of-entry markers echo the augmented-reality text that populated the backdrops. It’s not hard to picture a Sam Fisher reskin on top of Jacob’s or Evie’s character models. 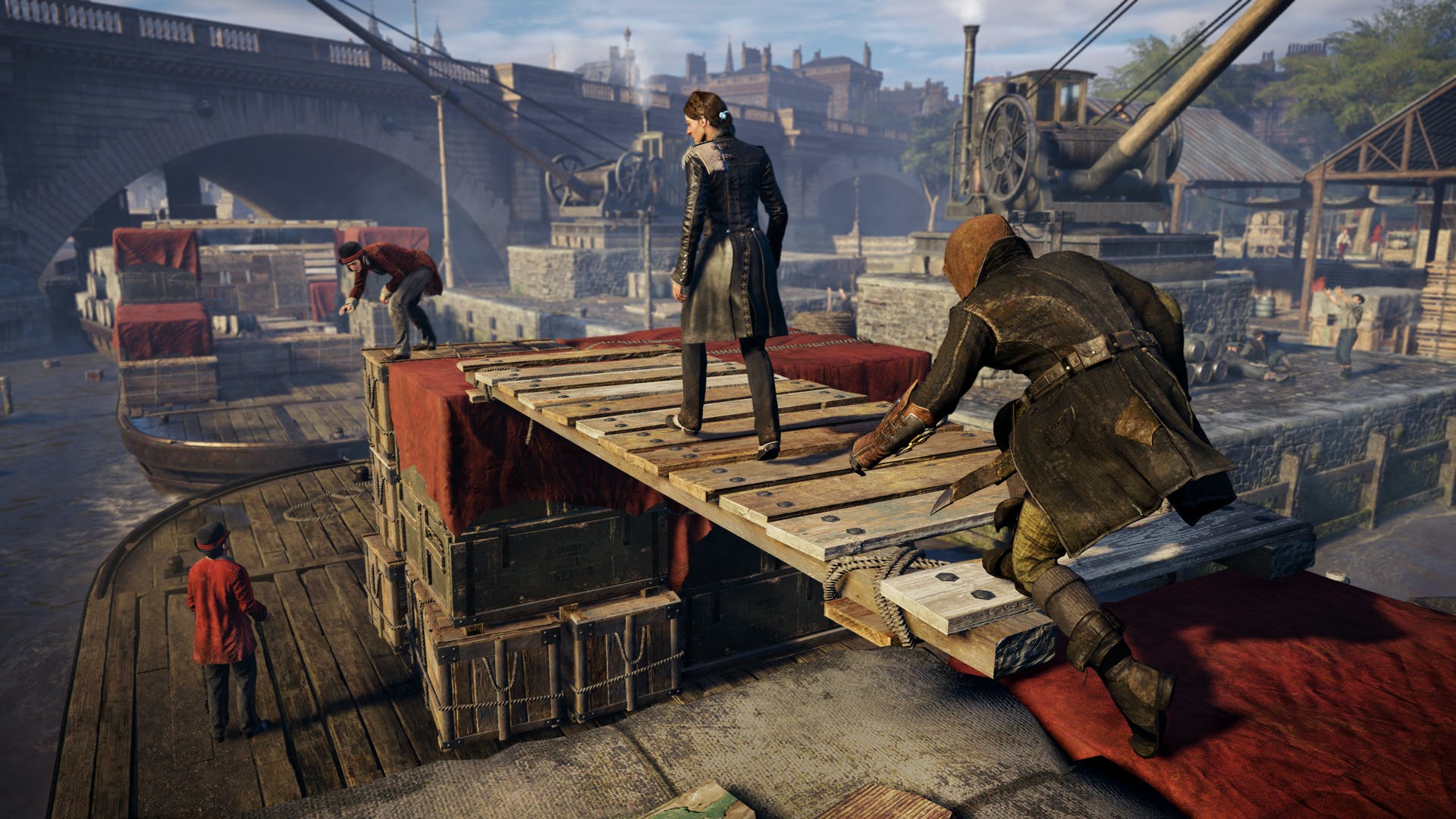 For as much as this series is known for stealth, melee combat has always played a significant part. It has improved incrementally over the years, most notably with the leap in responsiveness from ACIII to Black Flag. While I used to approach these fights reluctantly, I now accept them with confidence. Even the muscular brutes are easy pickings as long as you remember the Break Defense button.

From the series’ tech demo origins in the mid-2000, Assassin’s Creed has always been about using A.I. to further your cause, whether you’re recruiting novice assassins or bribing a group of harlots to conceal you while you’re simply walking down the street. This has long since expanded beyond the series’ hiding-in-plain-sight mantra, which also proved to be a hindrance in the densely populated interpretation of revolution-era Paris in Unity. For Syndicate’s Industrial Age urban setting, it’s the ability to manage gangs, partly as a rebellion against poor factory conditions. Running and growing your gang feels like a natural evolution of the brotherhood recruitment systems of past Assassin’s Creed games, only that it’s been adapted for the rough streets of London. That means there is no need to call in stealthy disciples to execute instant kills; your added muscle often works out in the open to take back ownership of the streets.

Assassin’s Creed Syndicate represents a welcomed return to form, the likes of which hasn’t been experienced since Revelations. If attaining this level of excellence meant removing all the complexities and ambition of multiplayer, so be it. I’ve appreciated many of the series’ iterations of online play—cooperative and adversarial—and I’ll bet that it will be making a return, along with ship combat. Syndicate’s Victorian setting is a fitting transition out of the plethora of Assassin’s Creed games based in the 18th century that have dominated the series these last three years. This new century is a fine a time as any for the series to undergo the closest thing to a reboot without actually going for a full reboot. Like the modern-day protagonists of the series who adventure through accumulated memories and experiences of their ancestors, Syndicate greatly benefits from the design and development experiences from all the Assassin’s Creed games that have come before it.

Disclosure: Our review copy of Assassin’s Creed Syndicate for PlayStation 4 was provided courtesy of Ubisoft.