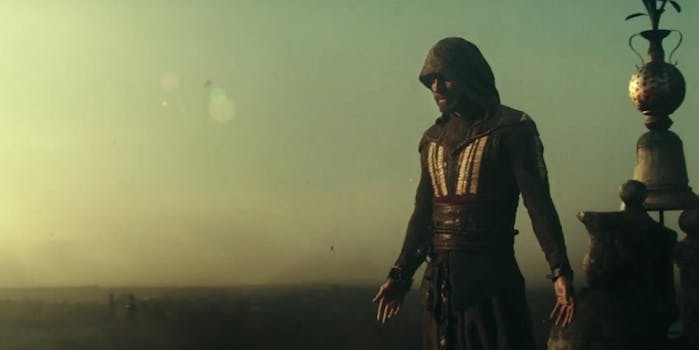 The Assassin’s Creed movie has a trailer, and it rules

Are you ready to see Michael Fassbender parkour his way through 15th century Spain?

The first trailer for the Assassin’s Creed movie is here, and we’re tentatively ready to say that it lives up to the hype.

After the dubious legacy of video game adaptations like Doom, Prince of Persia, and Hitman, Assassin’s Creed fans will be glad to hear that director Justin Kurzel (Macbeth) seems to have pulled it off.

Assassin’s Creed stars Michael Fassbender as a criminal who is saved from execution by a shadowy organization led by Marion Cotillard. In a scenario that blends time travel with Matrix-style simulations, he is forced to relive the memories of his ancestor, an assassin duriang the Spanish Inquisition.

The trailer strongly showcases the faux-historical aesthetic of the game, with plenty of parkour scenes for the Assassins and Templars. But the film’s real strength is its cast and director. Fassbender and Cotillard starred in Kurzel’s Macbeth last year, and while Assassin’s Creed is obviously a very different kind of movie, hopefully they’ll bring a similar intensity to what could otherwise be a rather silly video game adaptation.