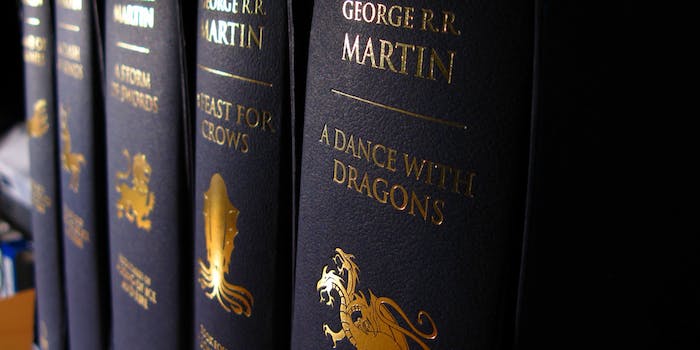 Will seven books be enough to tell what's left of the looming story in A Song of Ice and Fire?

Fans still have no hint of a release date for The Winds of Winter, but now George R.R. Martin’s editor is suggesting that the seven proposed books in A Song of Ice and Fire might not be enough to tell his story.

Anne Groell, editor of GRRM and fellow fantasy authors Terry Brooks and Robin Hobb, recently did a Q&A at Suvudu.com where she answered questions about the editing process and some small nuggets about why plot points were kept out of A Dance With Dragons. When someone asked about whether GRRM could wrap up everything in seven books, Groell revealed that she thinks he could exceed the number of books he’s promised to write.

“I begin to wonder—though seven is what we currently have under contract. I remember when he called me, years and years back, to confess that his little trilogy was…well…no longer a trilogy. He predicted four books. I said Seven Books for Seven Kingdoms.”

That mindset continued even as GRRM upped the number of books he needed from five books to six, and then finally up to seven, the number she envisioned. However, now that she learned there were “technically eight kingdoms” in Westeros, she would be OK with eight books.

For a fanbase already impatient with TWOW’s arrival (with some worrying about GRRM’s health), adding another book would just add to the stress and impatience, even if it does help answer every lingering question and conspiracy. But who could complain about more information?

“Lets all be honest here cause I know I’m not the only one who finished ADWD and thought, ‘Their is no way in hell he is finishing this in seven books,’” another person responded on Reddit.

Right now, it’s just a mere possibility. GRRM is still insistent on writing seven books, and until he says otherwise, that’s what we can expect, even if it publishes later than we’d prefer.

Groell shares the fans’ anticipation for the latest book and even wrote GRRM to plead with him to not let Game of Thrones get ahead of him.

“When I have a date, you will have a date,” she wrote. “I promise you we will put the word out as soon as we know. All I can say is that George is hard at work, and we hope to have it reasonably soon.”

Update: GRRM has since clarified his plans for ASOIAF to Entertainment Weekly. Although he still fully intends to write seven books as of now, he planned the series as a trilogy when he originally sold it.

“I write the stories and they grow,” he said. “I deal with certain things and sometimes I find myself not at the end of a story. My plan right now is still seven. But first I have to finish Book Six. Get back to me when I’m half-way through Book Seven and then maybe I’ll tell you something more meaningful.”

He’s been fairly consistent on seven books since he “firmly committed” to the number in 2011. Until he says otherwise, expect just two more books from him in the series. How long that’ll take is anyone’s guess.