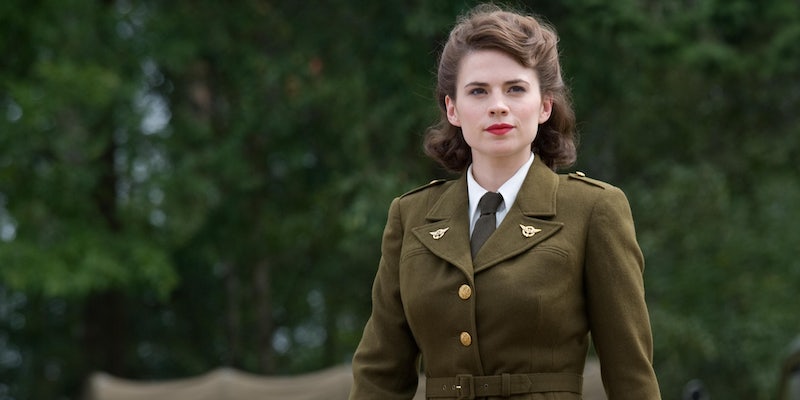 Here's the show 'Captain America' fans have been waiting for.

After months of uncertainty, Captain America spinoff show Agent Carter has been picked up for a full series. At the same time, ABC renewed Marvel’s Agents of S.H.I.E.L.D., which has been receiving increasingly positive reviews as its first season draws to a close.

The series begins in 1946, following the exploits of Peggy Carter (played by English actress Hayley Atwell) as she works for the Strategic Scientific Reserve, a precursor to Marvel’s S.H.I.E.L.D. agency. Dominic Cooper will reprise his role as Tony Stark’s father, Howard.

If Peggy Carter’s 2013 short film is anything to go by then we’ll also see her struggling with 1940s workplace sexism, which is presumably why the show’s press release describes her moonlighting on secret spy missions with Howard Stark. The idea of going back to “administrative work” would not have been a welcome post-war career change for the daring Agent Carter.

Agent Carter’s pilot episode was penned by Captain America: The Winter Soldier writers Christopher Markus and Stephen McFeely, but the overall showrunners will be Tara Butters and Michele Fazekas, creators of the CW series Reaper. This indicates that Agent Carter will follow in the footsteps of Marvel’s Agents of S.H.I.E.L.D., which eschewed the sci-fi TV tradition of an all-white, male-dominated writer’s room in favor of an unprecedentedly diverse pool of writers and directors.

The show doesn’t yet have an official air date, but it definitely has a ready-made audience. Captain America fans have been hoping for a Peggy Carter spinoff ever since the first rumors surfaced last year, and the idea of a female-led 1940s spy show is an interesting new expansion past Marvel’s headlining superhero properties.