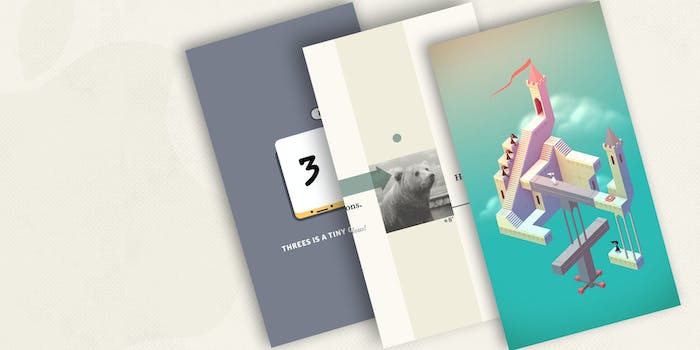 Games take the honors at the Apple Design Awards

One of the jokes or laments, depending on who you ask, of mobile game development is that even though they make a ton of money collectively on the App Store, Apple doesn’t care about video games. I’ve heard that sentiment expressed to me while covering the mobile game industry from a business perspective.

That’s a historical perspective. I’m not quite sure how much it applies today, and it certainly isn’t something that would continue if games keep winning awards—like Monument Valley, DEVICE 6, and Threes did on Tuesday night at the Apple Design Awards in San Francisco.

Monument Valley is a puzzle game reminiscent of Fez. The player manipulates environments to guide a princess through an adventure. Monument Valley has been praised for its gorgeous art design.

DEVICE 6 is a combination of a text adventure and a puzzle game. As the player scrolls through the story, movies that act like illustrations for the text play in see-through windows, and the words compose themselves on the screen to visually reinforce the pace and content of the text.

Threes! may require no introduction, as it’s one of the most popular iPhone games in recent memory. It’s a simple puzzle game in which the player has to arrange numbers in a line on a grid to merge numbers into factors of three. Threes! became so popular that it also unfortunately became another victim of the rampant game cloning which is common on the App Store.

Usability is of immense importance to all kinds of software, and in video games a developer absolutely cannot allow the user interface to get in the player’s way. Even the best video game in terms of rules and design will be sunk if the player can’t smoothly discern visually what they need to do, and how they do it.

So of course video games are taking awards at Apple’s design show. Video games might challenge the potential and limits of touchscreen software more than any other kind of app on the market.

A couple examples: The immensely popular iPhone game Dots was developed by accident by an iOS interactive designer, and Monument Valley was developed by ustwo, a company that works heavily in user interface design.