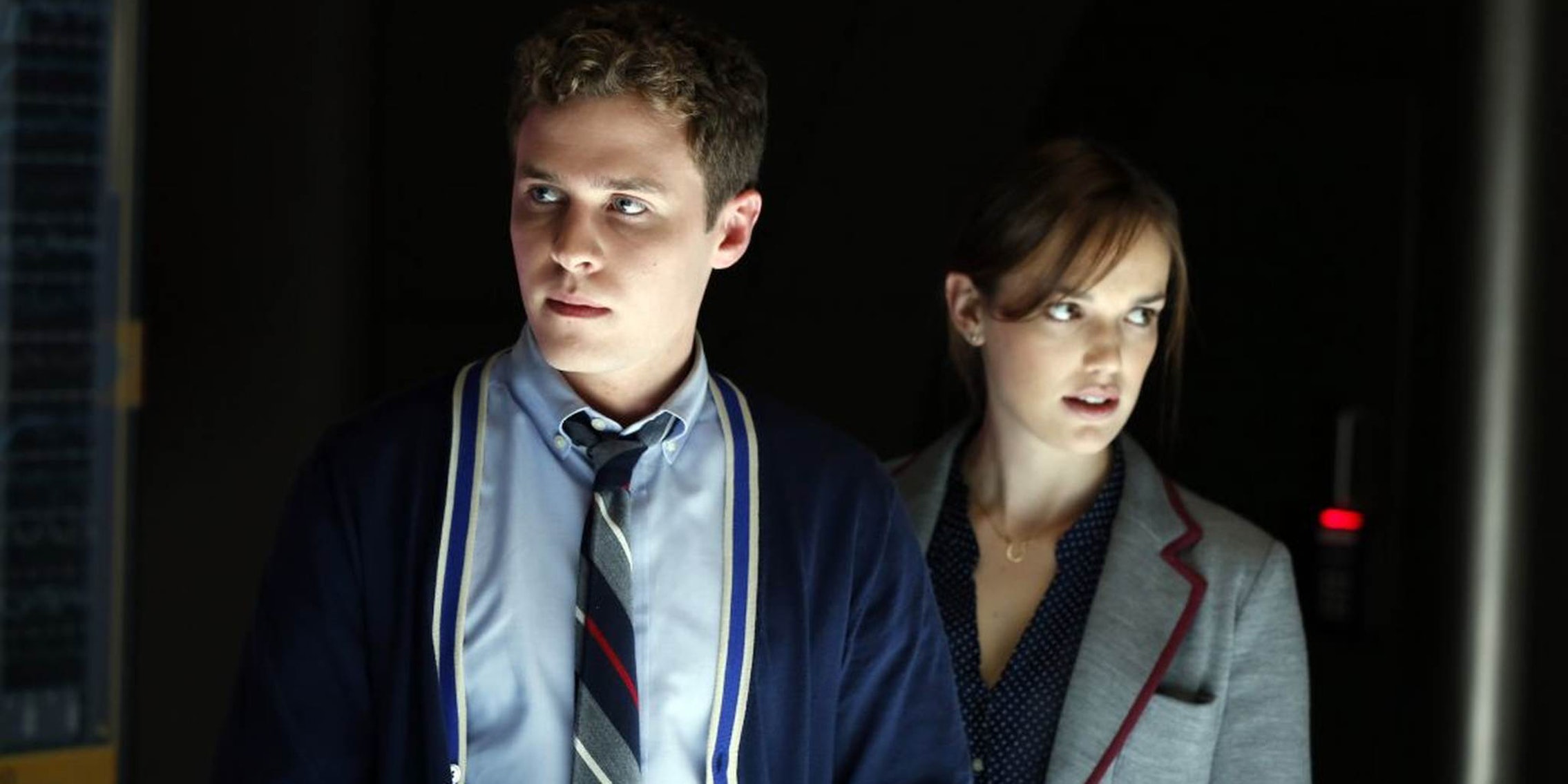 How costume designer Ann Foley zips up ‘Agents of S.H.I.E.L.D.’

Agents of S.H.I.E.L.D. has a cast to rival its Marvel Comics inspiration, featuring superheroes, aliens, spies, and now the Inhumans.

With this many characters on deck, costume designer Ann Foley has her work cut out for her. Most of the lead roles are kevlar-clad action heroes or suit-wearing secret agents, but she still managed to create an individual style for every character—especially S.H.I.E.L.D.’s perky science duo Fitz and Simmons, whose outfits are painstakingly cataloged by TV fashion blogs and Tumblr fandom.

Season 3 began last week with Inhumans appearing all over the world, Coulson missing a hand (both physically and metaphorically, since his right-hand woman Agent May has vanished), Skye donning the mantle of Marvel superhero Daisy “Quake” Johnson, and Simmons trapped on an alien planet. We spoke to Ann Foley about how she uses costume design to signal character development in the show, including some intriguing details about Simmons’ alien survival tactics and why Coulson stopped wearing ties. 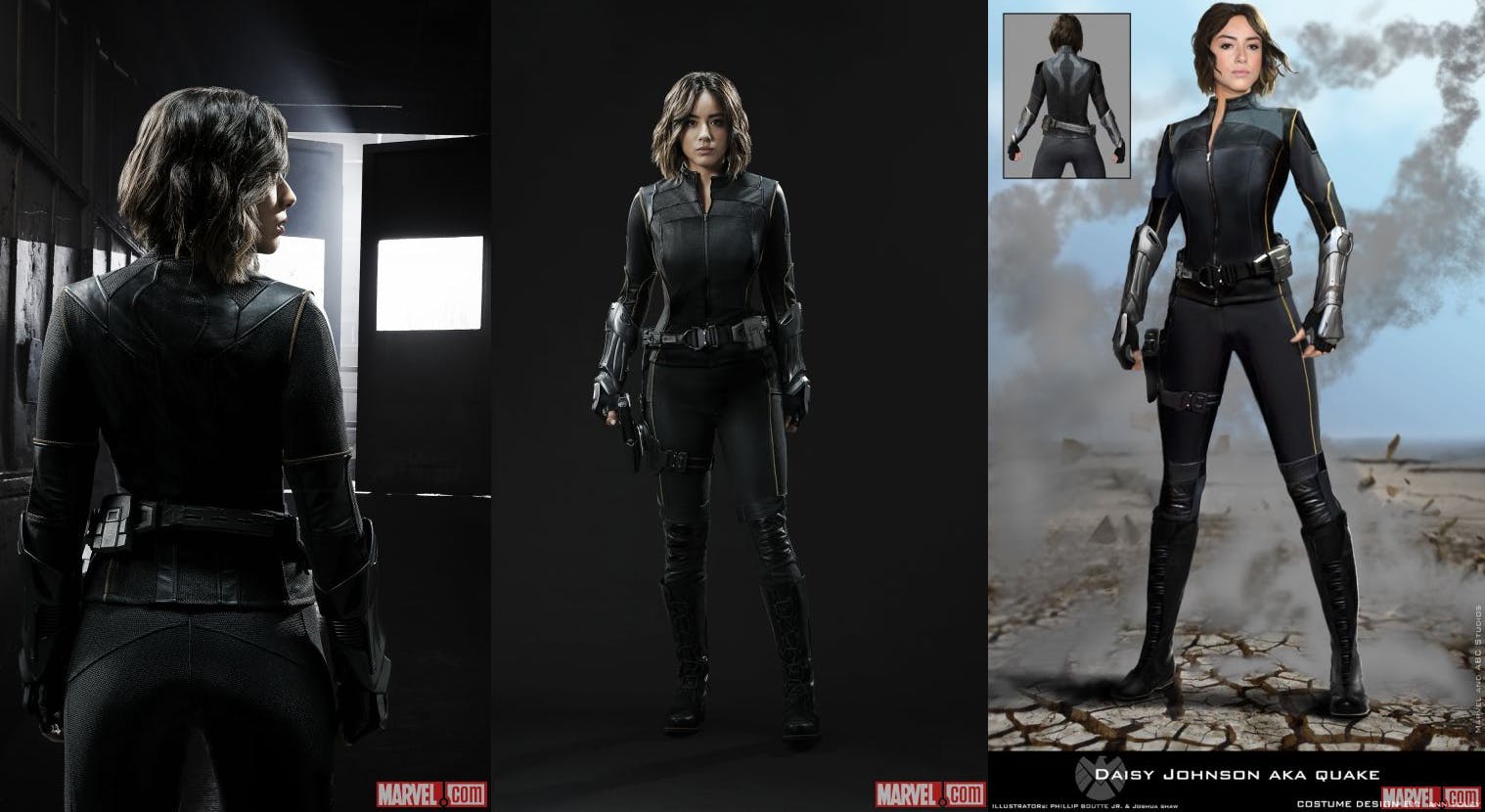 I thought I’d start by asking about Daisy. She’s gone through a transformation this season, she’s almost the first real superhero character in the main cast. Can you tell me a bit about the origin of her new costume?

As I’ve always done in the past, I go directly to the source material, which is the Marvel comics. I felt this time it was really important to incorporate the Quake symbol into her costume, which is what we did on her gauntlets and on the back of her suit. I needed it to feel tactical in nature, because that’s still what our team is. Any time I designed a superhero costume I needed it to make sense within the universe that we’ve created and established on the show.

The interesting thing is, you do have this mixture of super and non-super characters. One of the ones that drew me in to begin with was Coulson, because he has this ostensibly quite nondescript appearance. He always wears a suit, but he’s a really good example of how much you can say with just a plain suit. Would you say he’s a bit of a menswear nerd?

The thing behind Coulson is, going in to season 1—and I always stand by this—his suit was his armor. Coulson was always a company guy, and all of the S.H.I.E.L.D. agents in the films had a very specific look. They were G-Men, all of them in suits: black, navy and grey. The idea is they’re going to blend in and not to be noticed. So we decided to continue forward with that. 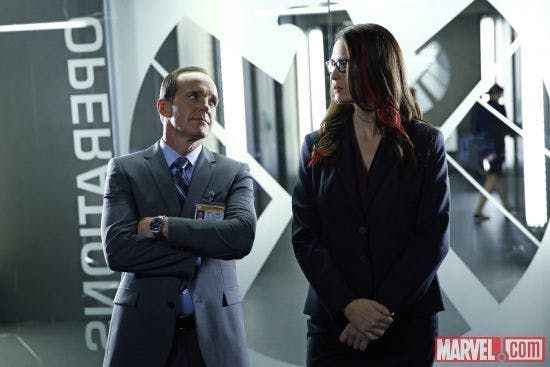 May was his right hand and she’s gone, so he has no one to help tie his ties.

When we came back in season 1 with Coulson 2.0, I slimmed down the suits a little and changed out his ties, they got a little slicker. Then with the events of The Winter Soldier, that really affected our show, and going into season 2 the show got darker in tone. So that’s when I introduced black into Coulson’s look.

Now going into season 3, we definitely are seeing a new look on him out of the suits. He has trouble tying ties now. I kind of look at it like, May was his right hand and she’s gone, so he has no one to help tie his ties. 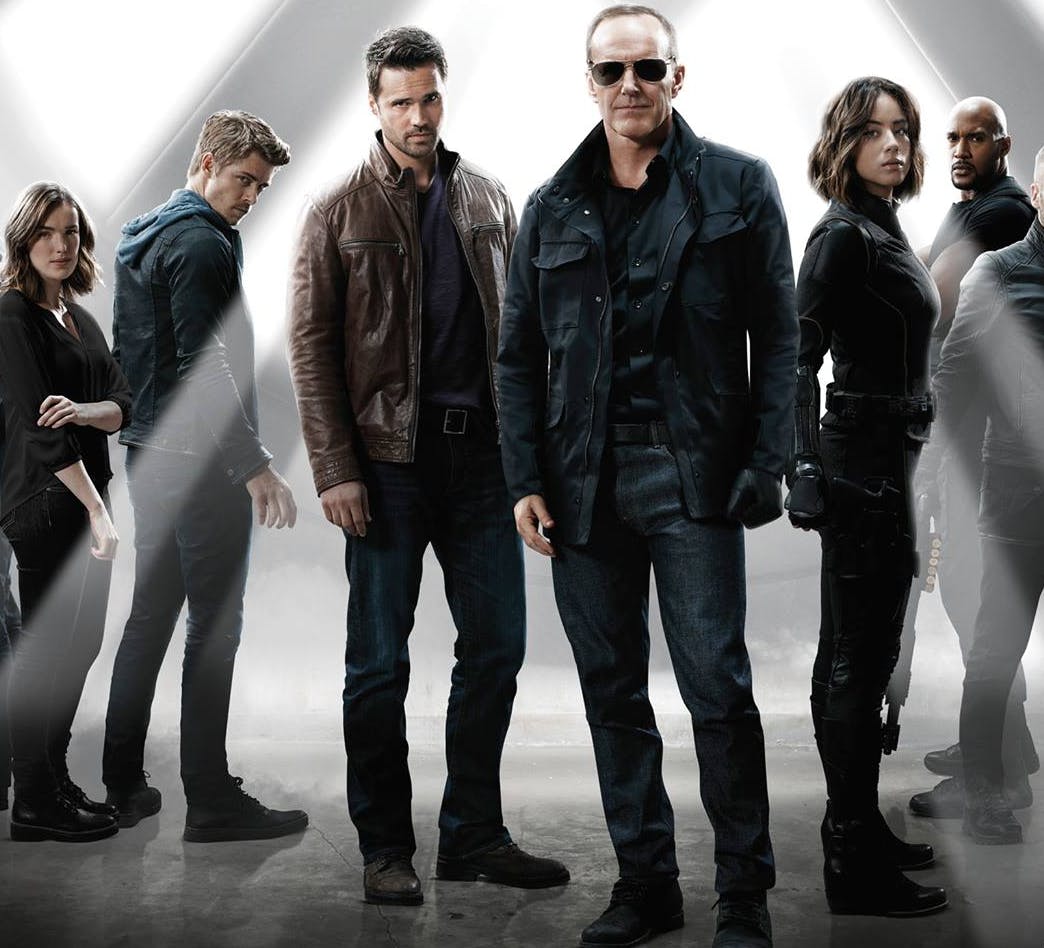 The darkening of the costumes is very noticeable last season. The thing that really brightens it up is Fitz and Simmons, who are kind of the fashion stars of the show—but they’re going through a big change this season. I think Simmons might have a hint of torn-apart, post-apocalyptic clothing on that alien planet. Can you talk about how they’re going to change this season, or is that too spoiler-y?

I’m gonna say hashtag #NoSpoilers, I’ll have to get back to you on that. But definitely, we’ve got a hint of [Simmons] in the tag of the first episode. What was really cool is a lot of people tweeted me like, is this her cardigan that she’s used as a bag around her neck? And I’m like, yup, that’s our girl. She’s very resourceful. She’s going to figure out a way to use everything that she was wearing and make it practical.

As far as Fitz, he just has some of the biggest changes we’ve ever seen. Fitz and Simmons going into season 2, they definitely had a much darker, more serious palette, because I wanted to reflect what happened to them at the end of season 1. He was suffering from those neurological problems and so that’s one of the reasons why we took the ties away from him. He was having problems with his hands, he wouldn’t be able to tie a tie.

And the same with Simmons. We were still going for the great textures and prints that she was known for in season 1, but it was a little bit darker, a little bit edgier. And you know in season 3 we’re going to see another shift, especially with Fitz, and it’s more emotionally based. He’s the one who is the most affected by Simmons going through the monolith, and he’s growing up yet again.

You spoke about the inspiration you take from Marvel comics. Where else do you go to find new looks for the show? Is it fashion sites, or other costume designers and TV shows that you look to for inspiration?

Not other TV shows, I’ve gotta say I’m not a big watcher of TV even though I work in it. My two favorite shows are Outlander and Game of Thrones, but no, Outlander is not an influence on the show, unless you start seeing somebody in a kilt!

For the comic book characters, I try to go to the MCU (comics) because that’s some of the best research available. I always try to incorporate elements from the original characters into the costumes on the show. As far as the regular looks, I have a couple of street-style blogs that I follow on Tumblr, so that’s usually where I go to for inspiration.

#Repost @pboutte with @repostapp. ・・・ Ladies turn! Some concepts from this past season. What a wild ride. These two kick all sorts of ass on the show! #marvel #agentsofshield #melindamay #bobbymorse #mockingbird #conceptart #illustration #costumeillustration

Do you ever take cosplay into account? I’ve heard from a few comic book artists that they now consider it when they’re designing new costumes: are people going to wear this to a convention?

That’s interesting! I never thought of it that way. I love the cosplayers, I really do. I was fortunate enough to go judge the grand championship of cosplay earlier this year at C2E2, and that was probably one of the coolest things in my entire life. But you know, the funny thing is, I haven’t seen a ton of our characters’ cosplay yet, with the exception of May and Skye’s tactical look from season 2. I finally saw Mockingbird recently, nothing makes me happier. To me it’s like the ultimate compliment, it really is. I cannot wait to see someone cosplay Quake.

Do you ever have a personal backstory in your head for how the actual costumes in the show came about in the story? When I’m watching sometimes I’ll think, you know, is there a HYDRA agent somewhere who is carefully doing graphic design to make sure the logos work well on the uniforms and so on. Or do you just stick to the real-life pragmatic design?

Well, you don’t really get the luxury of coming up with that sort of backstory, but that being said, I do try to always come at it from a character perspective. Our cast is great for that, they’re always part of the process, whenever we’re doing fittings. Their voice is very important to me. I also work very closely with Maurissa Tancharoen, one of the co-creators of the show. 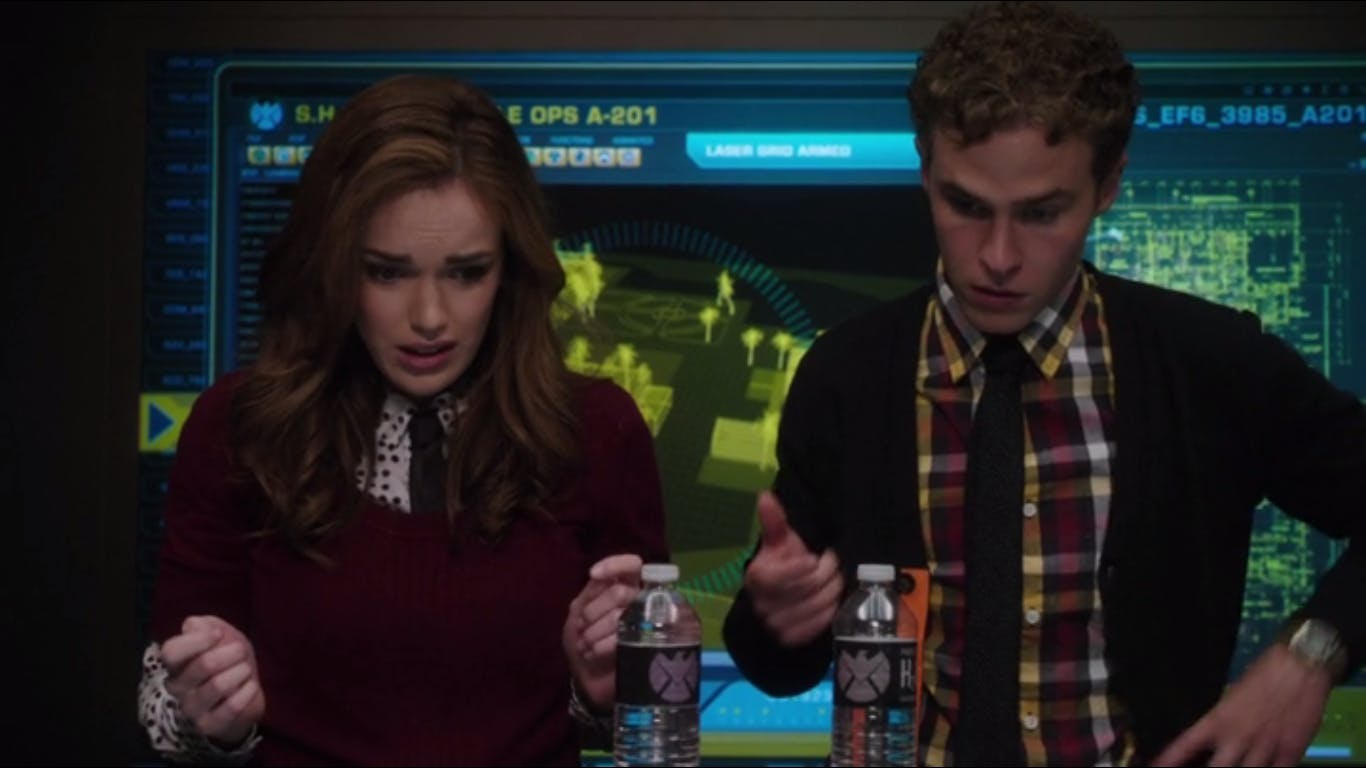 So, is there one of these little characterization-based details that people might be able to pick up on in the show that came from one of the actors or Maurissa?

I think that with Simmons for example, it was her love for mixing the practical with the fun. You know, the prints and the patterns, and she always had her little combat boots on. With Daisy, with Skye, there was a street style kind of vibe with her. It was more colorful in season 1 but as her story progressed it got a little bit darker.

What would be your dream Marvel character to design for on the show?

Spider-Gwen! Are you kidding? She’s amazing!

The Marvel’s #AgentsofSHIELD family is back together, TONIGHT at 9|8c on ABC! pic.twitter.com/sNzbQIcApU