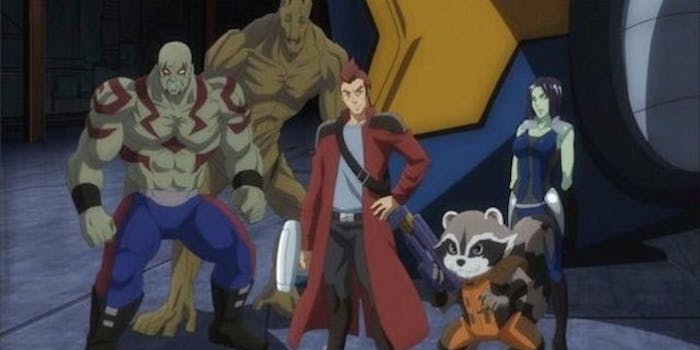 See the Guardians of the Galaxy as anime characters

After the huge success of Guardians of the Galaxy this summer, it’s clear the quirky heroes aren’t going anywhere anytime soon.

Now that they’ve conquered the box office they’re moving on to another medium before we get to enjoy the sequel: anime. This week the team made an appearance on the series Marvel Disk Wars: The Avengers in Japan.

The Guardians were given thorough makeovers to fit into the classic anime style, including spiky hair for Star-Lord and huge eyes for Rocket. You can catch a glimpse of the team in the below clip which, as translated by Anime News Network. It includes a narrator saying, “What came from space was an extremely tough crew of outlaws. The super tag-team between the Avengers and Guardians comes together. Next time on Disk Wars: Avengers: Together With the Guardians. Finish it with a D Smash!”

If that’s not enough to satisfy your anime Guardians appetite, the folks over at Screen Crush have some GIFs from the episode you can see here. The Guardians will return for next week’s episode on Wednesday.