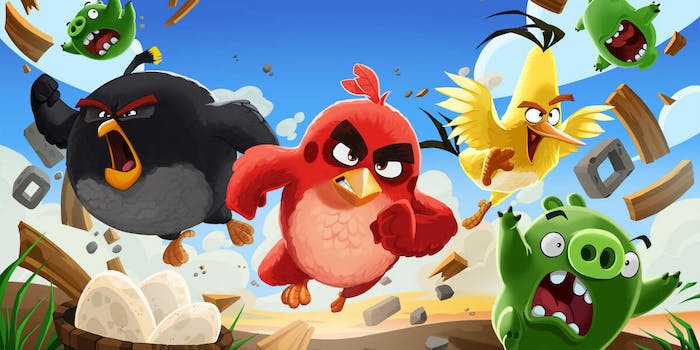 Are you good enough at Angry Birds that you’d bet money on your skills? Thanks to a partnership between Rovio and GSN Games, now you can. The game is called Angry Birds Champions, and it’s available on the competitive gaming platform WorldWinner. You can access it at worldwinner.com or in the WorldWinner iOS app.

WorldWinner now contains a standard Angry Birds game, which means you’ll slingshot a variety of birds toward pigs standing in shoddily built structures. Knock the structures down, and the pigs fall, only to disappear in a puff of smoke. The more damage you do, the higher your score. But if you’re feeling lucky (and skilled), you can also participate in tournaments.

You can try your hand at Angry Birds Champions tournaments for free. But if you want to make a bet, you’ll have to make an initial deposit, followed by entry fees for each cash tournament.

To make things a little more strategic, each player gets a certain number of “Swap” power-ups. These let you switch out the bird in your slingshot for whatever bird is up next. This can be useful because each bird operates differently.

Once you’ve locked in your score, another player of a similar skill level gets to play the same levels you did. For cash tournaments, whoever comes out on top wins more cash than they put in, while WorldWinner takes a slice off the top.

If this sounds like gambling, WorldWinner would like to inform you that, in fact, it’s not. Gambling relies on chance. Because these tournaments are skill-based, anti-gambling laws don’t apply.

Other games on the WorldWinner platform include Scrabble, Solitaire, Trivial Pursuit, and Wheel of Fortune. You can play those for cash rewards as well.