In the foreword to Angel Catbird, Margaret Atwood assures the reader that she isn’t just dipping her toe into the graphic novel medium; she was already fully submerged.

Reminiscing about comics she read as a child—Li’l Abner, Mickey Mouse, Golden Age superheroes like Batman and Wonder Woman—she hints at geek cred beyond her public image as “a nice literary old lady.” Although of course, she’s already an icon of the sci-fi genre, albeit one who isn’t wholly comfortable with the label.

After a lifetime of doodling away at self-drawn comic strips and sketches (including the preliminary designs for this book), Atwood enlisted artist Johnnie Christmas and colorist Tamra Bonvillain to bring Angel Catbird to life. Because, as she explains, her own artistic skills were not up to the task of making the book’s hero “look sexy, like the superhero and noir comics I’d read in the forties.”

The result is an entertaining and unabashedly old-fashioned origin story, built around a familiar framework of characters: a mild-mannered scientist hero, his love interest, and a dastardly villain with far-fetched plans for world domination. Its mid-20th century inspiration is obvious, both in terms of tone (hardly a page goes by without someone uttering a cat pun) and the story, which sees our hero, Strig Feleedus, gain superpowers after being spliced with an owl and a cat.

Strig’s newfound hybrid status attracts the attention of his evil boss, a rat-themed riff on Batman’s Penguin, who wants to take over the world with an army of genetically engineered rats. A perfect set-up for a classic supervillain showdown—although the book doesn’t really acknowledge the strangeness of framing cats as the underdogs in a war with their natural prey.

While Atwood’s intentionally hokey dialogue calls back to Golden Age comics, Johnnie Christmas and Tamra Bonvillain’s art prevents Angel Catbird from getting too pastichey. There’s no attempt to make this comic look like it came from the 1940s, and it’s set in a comfortably nonspecific time period where people use cell phones but “science” involves test tubes of mysterious blue liquid. When Strig’s love interest Cate introduces him to a secret community of cat people, it’s through a rather dated party scene that feels like something from vintage X-Men.

Everyone clearly had a lot of fun making Angel Catbird, although fans of Atwood’s other work shouldn’t expect too much social commentary or subversiveness. This is such a traditional origin story that its villain literally has a bullet-point list of world domination plans, and the one female character moonlights as a bikini-wearing night club singer. (Strig, however, is more attracted to her catlike scent, one of the many unexpected effects of his accident.) 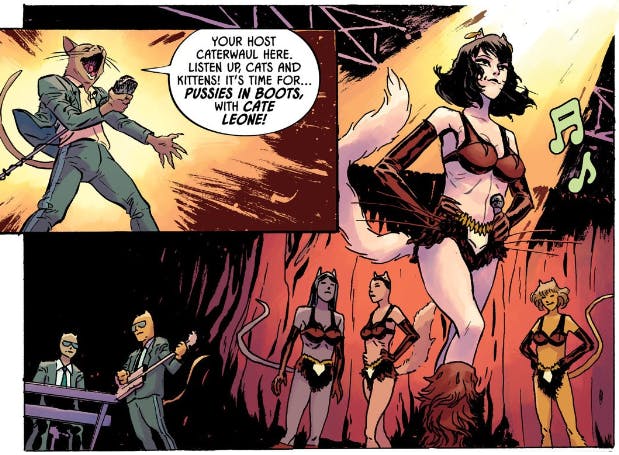 The most surprising aspect of Angel Catbird is its educational content. Atwood mentions in the foreward that she wants the character to be used as a teaching tool for children, sharing advice about cat safety. Every few pages, the story itself is annotated with a cat safety factoid, advising readers to visit an informative website. Did you know that about 200,000 cats die from car accidents every year in Canada? Well, now you do.

To comic fans who have already read numerous vintage origin stories in the vein of Spider-Man or the Golden Age heroes, Angel Catbird won’t bring anything new. But that isn’t necessarily a bad thing. Volume 1 is a fun, pulpy read, and we’re interested to see where the next book goes with its apparent focus on the vampiric Count Catula.

It’s also oddly comforting to know that at the age of 76, after achieving worldwide acclaim as a literary author, a writer like Margaret Atwood can happily turn her attention to a pun-filled superhero comic about cat safety, emblazoned with a shirtless, muscular catman on the front cover.