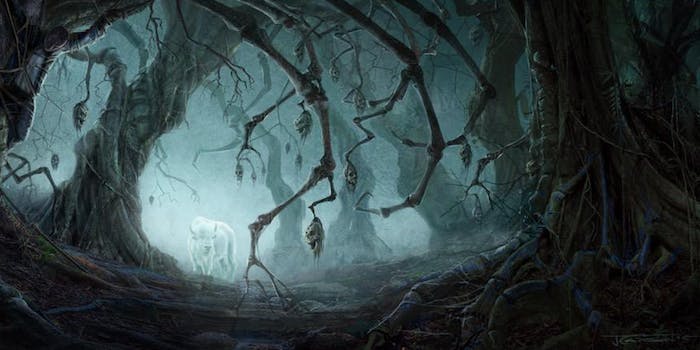 Could we get any more hyped for the American Gods series? Apparently so.

The upcoming American Gods TV show is one of those rare page-to-screen adaptations that we feel certain will do justice to the original novel.

Neil Gaiman is onboard as executive producer, and one of the two showrunners is Bryan Fuller, who has already proven his ability to handle a sensitive adaptation with NBC’s Hannibal. Plus, both Gaiman and Fuller have made it very clear that they won’t run afoul of American Gods fans’ biggest fear: that a TV show or movie might cast a white actor in the lead role of Shadow. A recent interview with Fuller suggested that, as with Hannibal, he’ll actually be pushing for more racial diversity in the cast, not less.

In case you weren’t excited enough already, Fuller and Gaiman have started to post some awesome American Gods concept art on Twitter.

So that's a YES, then. Here you go.
I love this painting. It's of Shadow's dream of the #boneorchard #AmericanGods pic.twitter.com/VyB2ywA1z8

This bone-orchard illustration teases one of the most memorably creepy scenes in the novel, but this next image—not attached to any specific set piece—feels like an even better interpretation of the novel’s apocalyptic tone.

The upper section of this art looks like a vintage woodcut of some epic mythological or biblical scene (probably Odin, since the horse appears to have more legs than usual), while the lower third is straight comic book art. An ideal combination for a story where everyday Americana meets the dark side of old religion.