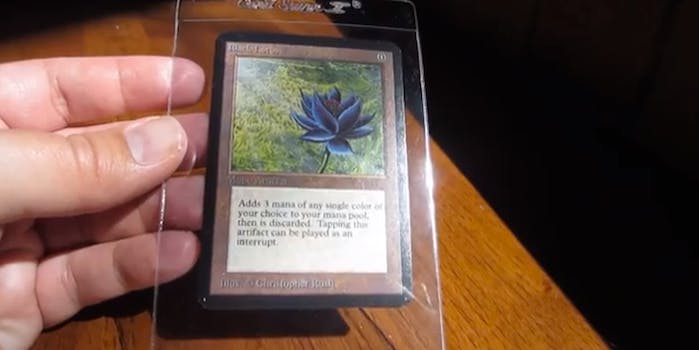 Watch this lucky gamer freak out when he unearths a $27,000 Magic card

He must have stored up a lifetime of luck to discover this card.

It’s the Willy Wonka golden ticket of Magic: The Gathering cards, and one man just got a pass to the chocolate factory.

Just watched a 10min unboxing of an alpha MagicTG pack ending with a Black Lotus. Guy’s reaction to seeing the card was adorable. #geeklove

YouTuber “openboosters” unveiled an Alpha Black Lotus during a live stream of opening an Alpha Starter Kit on YouTube. It happens around 8:15 in the video, and his response is, not surprisingly, pretty ecstatic.

The Alpha Black Lotus is one of the rarest cards in Magic: The Gathering. Only about 1,100 of these cards are thought to be in existence. An unplayed one sold for more than $27,000 last year, and the one openboosters discovered is in mint condition. The wrapped-up deck alone was worth more than $6,000.

Here’s a closer look at the Alpha Black Lotus, one day after openboosters uncovered it. It’s one of the earlier cards from MTG, and has been named one of the strongest of the “Power Nine.” So what does it do, exactly? In basic terms, it lets the player “add three mana of any single color to your mana pool.” While that might not sound impressive by itself, players say it’s a card that’s all about combinations.

According to Game & Guide, the card forms part of a combo that allows a player to reduce his or her opponent’s life from the starting of 20 to 0—thus winning the game—on the first turn. That’s why it’s banned in just about every tournament except Vintage formats, which are unsanctioned and boast players with multi-thousand dollar sets.

Even Vintage has limits on what Alpha Black Lotus can do. Each player can only have one in their deck, instead of four.

Openboosters is currently sending the card to be graded, which means it will get appraised between a score of one to 10 and sealed in a plastic case. That means it can’t be used in sanctioned tournaments, but since the only one that takes the Alpha Black Lotus is unsanctioned, it may not be a big deal.

Best thing I’ve heard all tour: “And then she bought her wedding dress by selling that beta Black Lotus”