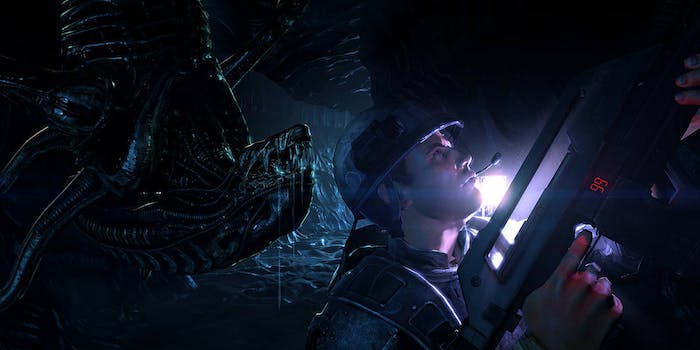 Who’s to blame for the marketing of Aliens: Colonial Marines?

Video game publisher Sega has tentatively settled a class-action lawsuit to the tune of more than $1 million, in response to the claim that the marketing for Aliens: Colonial Marines misrepresented the final product. The suit, filed on April 30, 2013, claimed that prerelease demos of the game falsely represented its final quality.

Gearbox Software, the studio that developed Aliens: Colonial Marines and largely presented those demos at expos and conventions, not only rejected the offer to settle the suit, but asked to be removed from the case, claiming Sega was responsible for the marketing, not Gearbox.

There is little argument over the fact that Aliens: Colonial Marines was a terrible video game. The versions released on PC, PlayStation 3, and Xbox 360 all received dismal reviews. Consensus was that the story was bad, the graphics were sloppy, animations were rough, and enemies with no tactical intelligence whatsoever were just thrown at the player.

The argument now is over who was responsible for making the audience expect something different. On July 30, Gearbox filed a motion to be removed from the suit altogether, arguing that Gearbox developed the game under contract to Sega, who ultimately was responsible for marketing Aliens: Colonial Marines.

In their latest court filing on Sept. 2, Sega claimed that Gearbox Software was equally responsible for the way the game was marketed, as Sega was obligated to discuss all marketing decisions with Gearbox.

Gearbox Software’s president, Randy Pitchford, is a larger-than-life studio head with no compunctions about engaging with fans or the press. When Pitchford introduces a game to a crowd, he does so with a big grin and good-natured expletives to punctuate his enthusiasm.

Sega claims that Pitchford went well beyond the parameters established by Sega for marketing Aliens: Colonial Marines at E3 in 2011, and cites past instances where Pitchford leaked game details while sitting on panels at video game conventions.

The two companies are also feuding via contradictory court filings as to whether or not Gearbox made any money off sales of the game. Gearbox claims that they sank their own money into production, which is not usually how publisher-developer deals work, and that Gearbox has not been repaid for those investments. Furthermore, Gearbox claims that they have not received any royalties on sales of Aliens: Colonial Marines.

Sega, on the other hand, says that advance royalty payments were made at set points along the development timeline, and therefore that Gearbox will only receive new royalty payments when those advances have been repaid to Sega.

The last video game industry court case to hold this kind of attention was the lawsuit between publisher Activision and developers Jason West and Vince Zampella, over alleged breach of contract when West and Zampella, the creators of the Call of Duty franchise, began discussions with publisher Electronic Arts, a chief rival of Activision.