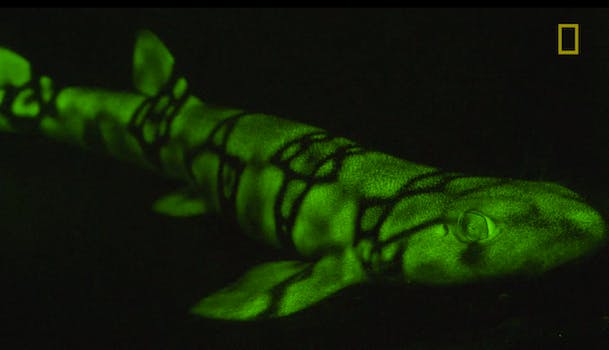 Glow-in-the-dark sharks are the highlight of Shark Week

Stepping away from its usual nightmare fuel, Shark Week gives us fun science about sharks of the deep.

After coming under fire for its factual inaccuracies and increasingly hyperbolic portrayal of earth’s most misunderstood predator, Shark Week took a different approach to last night’s special. “Alien Sharks” took a look at the many bizarre and little-known sharks of the deep, including many that have only recently been identified.

And the megamouth shark, so named, because, well.

Then there’s this guy, the kind you don’t want to meet in a dark trench alone at night.

In other words, ALIEN SHARKS.

The best part of all is that Shark Week didn’t have to indulge in gimmicks or scare tactics to get viewers interested in these creatures. I mean, obviously.

In fact, the episode was a notable departure from recent Shark Weeks, in that it was filled with science, research, and a close-up look at teams:

The #AlienSharks series is the best of #SharkWeek . Science, biodiversity, amazing footage of cool animals. MORE OF THIS PLEASE @SharkWeek

I need to get out on one of those shark research boats one day. Watching and a lil jealous 😀 #Aliensharks

Above all, the Alien Shark episode emphasized conservation and protection of these valuable species—an all too often-overlooked message considering humans kill 100 million sharks each year, mainly due to the brutal and inhumane practice of shark finning.

Too grim for you? No worries, you can still enjoy your yearly round of fin-tertainment—just in time for tonight’s episode, “Bride of Jaws.” And if that’s not enough, tomorrow brings us “Ninja Sharks.”

I, for one, welcome our new alien ninja shark overlords.