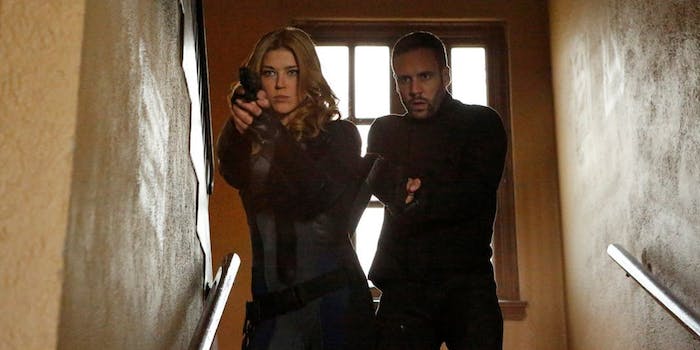 There's still another Marvel TV show on the way.

When Marvel Studios revealed plans for an Agents of S.H.I.E.L.D. spinoff, some fans hoped it might be something about the Inhumans—maybe even leading into a Ms. Marvel adaptation. As it turns out, the spinoff is more likely to be another show about non-superpowered characters.

The Hollywood Reporter and Deadline are both reporting that Adrianne Palicki and Nick Blood (Agent Bobbi “Mockingbird” Morse and Lance Hunter in Agents of S.H.I.E.L.D.) are finalizing deals to star in the spinoff, although Marvel Studios hasn’t officially confirmed this yet.

Bobbi Morse and Lance Hunter joined Agents of S.H.I.E.L.D. this season, as a double-crossing S.H.I.E.L.D. agent and a wisecracking mercenary respectively. They’re a divorced couple with an on again/off again relationship, with Lance Hunter (a minor character from the Captain Britain comics) taking the place of Morse’s comic book ex-husband Hawkeye.

Any show starring these two is likely to have an action/adventure tone, as Lance Hunter is basically hired muscle while Bobbi Morse is an elite undercover agent. The current season of Agents of S.H.I.E.L.D. has already sown the seeds for them to get their own storyline, which is just as well because AoS’s ever-growing cast list is starting to get unwieldy. They could even be joined by other AoS characters like Fitz (who recently split off from S.H.I.E.L.D.), Mack (who has a history with Morse and Hunter), or flashback appearances from Lucy Lawless as Isabelle Hartley.

Marvel is also planning a “mystery” TV series from writer John Ridley (12 Years a Slave), which will apparently reinvent an existing property that hasn’t appeared in the Marvel Cinematic Universe yet. So there’s still hope for Kamala Khan, although the addition of two new ABC/Marvel series makes it seem less and less likely that Agent Carter will be renewed for a second season.