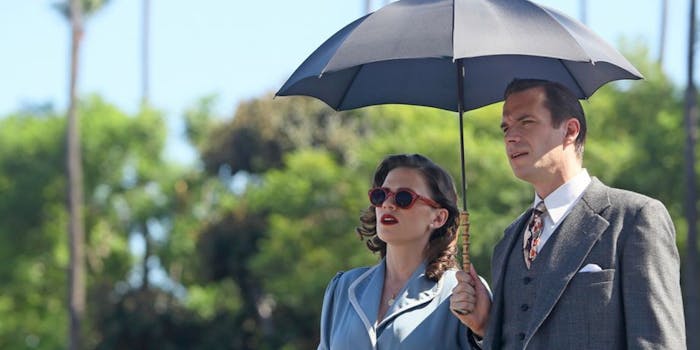 The new tagline for Agents of S.H.I.E.L.D. should be "Everything is terrible."

Agents of S.H.I.E.L.D. is at a turning point, switching over from the HYDRA storyline of Captain America: The Winter Soldier to focus on the emerging Inhumans.

This, perhaps, is the weakness of being attached to the wider Marvel universe. AoS has to go the way the wind blows, and right now that means disposing of HYDRA in the fastest way possible. We’re sure they’ll turn up in later episodes, but HYDRA is no longer the world-obliterating presence of season one. Instead, it’s time to deal with Skye’s newfound powers, Raina’s spiny metamorphosis, and the mysterious cadre of Inhumans headed up by that eyeless teleporting man.

Agent Carter‘s eight-episode run was designed to keep AoS‘s timeslot warm during the mid-season hiatus. Unfortunately, this leads to some rather unflattering comparisons between the two shows. While Agent Carter was fast-paced and witty, AoS felt bogged down in exposition as we reacquainted ourselves with its many, many subplots. Plus, there’s the issue of Skye’s transformation into an earthquake-wielding Inhuman.

Most fans have known for months that Skye has superpowers, so this episode’s slow reveal was not so much suspenseful as frustrating—especially because several of the trailers focused on her powers. The most satisfying moments were her scenes with Fitz, who for obvious reasons is more likely to sympathize with her plight. No episode is complete without Iain De Caestecker breaking your heart with his sad cardigans and ever-flowing tear ducts.

Given Skye’s isolation and her father’s mention of an “index” of registered Inhumans, it seems increasingly likely that AoS is teasing some backstory for the superhero registration act of Civil War. But since AoS has a fraction of the audience of the Marvel movies, it can only go so far.

When AoS began, I hoped it would explore the morally ambiguous nature of S.H.I.E.L.D. The revelation of HYDRA meant we got this conflict in spades, but we haven’t actually seen much improvement since then. This is still an organization that kills and detains people without trial, now doling out vigilante justice on Phil Coulson’s orders. Yet for some reason, it’s still positioned as the good guys.

This week’s episode ended with a wake for Agent Trip, pointing out that he embodied all the positive traits Coulson wants S.H.I.E.L.D. to represent. The problem is, it’s difficult to tell whether this idea is being delivered with a kind of gallows humor irony, or if we’re meant to take it at face value.

When Mack criticized Coulson’s leadership it was explained away as an angry outburst, but he did have a point. Coulson is caught between his own self-image as a “good man” and the necessity of doing horrible things so S.H.I.E.L.D. can stay afloat. The end result is a leader whose avuncular charm inspires loyalty among his immediate subordinates, but whose decisions have a high body count. Meanwhile Skye is afraid for her life after Simmons implied that Inhumans should be killed on sight, and Mack and Bobbi Morse are embroiled in some kind of secret plan. No one at S.H.I.E.L.D. is safe, even from each other.

At this point we need to just admit that Agents of S.H.I.E.L.D. is grim as hell. Its protagonists are all traitors, killers, or traumatized victims with nowhere else to go, and S.H.I.E.L.D. itself is, at best, a necessary evil. The outside world is riddled with Nazi conspiracies and weird cults that train teenagers to go through unpredictable alien mutations. Even when someone gets a cool superpower, it’s usually coupled with brainwashing or painful ostracism.

Face it, Agents of S.H.I.E.L.D. is no longer a funny sci-fi procedural about a lovable team of misfits. It’s a gritty dystopian drama with a handful of comic book references on the side.