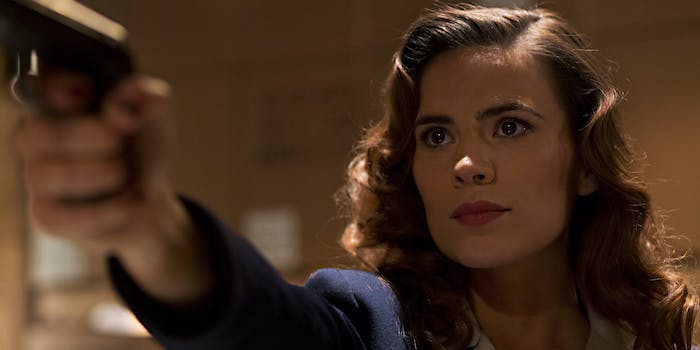 Marvel fans have been increasingly vocal about their desire for more female-led storylines.

Marvel’s TV panel was one of the hot tickets at San Diego Comic-Con on Friday. Fans weren’t just waiting for a behind-the-scenes glimpse of Agents of S.H.I.E.L.D.—they got to be first in line for new info on the upcoming Agent Carter show.

Set in 1946, Agent Carter will be the first female-led storyline set in the Marvel Cinematic Universe. It follows the adventures of Captain America’s Agent Peggy Carter (Hayley Atwell) in her new life after the war, as she tries to build a career as a spy in the Strategic Scientific Reserve, a kind of precursor to S.H.I.E.L.D.

Carter is a fan-favourite character and this show has been hotly anticipated for months, even moreso after the success of Captain America: The Winter Soldier.

Friday’s Marvel TV panel revealed that Agent Carter will be employing plenty of heavy-hitters behind the scenes. Along with showrunners Tara Butters and Michelle Fazekas, the first episode was written by Captain America: The Winter Soldier screenwriters Christopher Markus and Stephen McFeely, with the directors of Winter Soldier (the Russo brothers) working on episodes two and three. Joe Johnston, director of Captain America: The First Avenger, wants to make episode four.

This is all excellent news for Agent Carter. Agents of S.H.I.E.L.D., which tested the waters as Marvel’s first foray into live-action TV, employed a roster of established sci-fi TV writers and directors, but very few big names from Marvel Studios. Joss Whedon directed the first episode, but had no credited involvement after that.

The fact that Marvel is re-hiring so many of the creative minds behind the Captain America movies indicates that they’re treating Agent Carter as a very serious investment.

Since the pilot episode won’t air until January 2015, the Marvel TV panel didn’t reveal a whole lot about Agent Carter’s plot. Showrunner Michelle Fazekas hinted at other female characters, “both good and bad,” but the biggest news came from a separate interview: Howard Stark’s butler Edwin Jarvis will appear in the show.

Jarvis is basically Tony Stark’s equivalent to Alfred in the Batman comics. He helped raise Tony while his parents were away, and later on, Tony modeled his artificial intelligence J.A.R.V.I.S. after him. In turn, this leads on to the creation of Ultron in Avengers: Age of Ultron next year.

Seeing the original Jarvis in the flesh will give the show another link to the present-day Iron Man storylines. We’re unlikely to see baby Tony Stark anytime soon, though: He was born in 1970.

Without us getting too enthusiastic before the show has actually aired, it does sound like Marvel is ticking all the right boxes for Agent Carter to be a success. The main problem with Agents of S.H.I.E.L.D. was that it took a long time to pick up speed, partly because they had to introduce a cast of new characters in a completely new setting. The only familiar face was Agent Coulson, and fans often complained that the series didn’t spend enough time linking up to the movie universe. It wasn’t until Agents of S.H.I.E.L.D. crossed over with Captain America: The Winter Soldier that things really got going.

Thanks to its 1940s setting, Agent Carter doesn’t face the problem of seeming too disconnected from new movie developments. And, oddly enough, it actually has more of a link to Marvel movie canon, in the form of Howard Stark and Peggy’s history with Captain America.

The other thing they’re doing right is the very basic fact that it’s a TV show starring a woman, and helmed by two female showrunners. Marvel fans have been increasingly vocal about their desire for more female-led storylines, and Agent Carter star Hayley Atwell has become one of the figureheads for this campaign. Looking at the Marvel TV panel, it seems that she’s already had quite an impact: every single person who asked an audience question was cosplaying as Agent Peggy Carter.