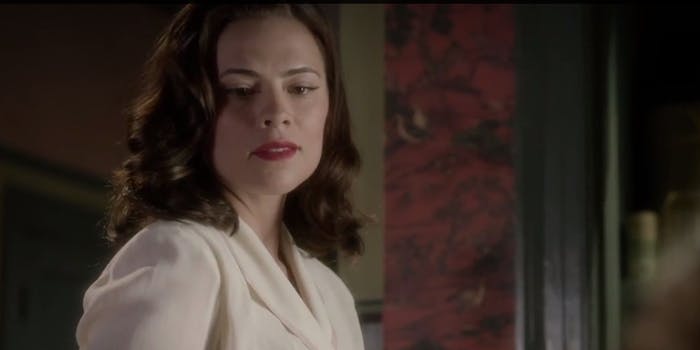 We’ve already seen a sneak peak into Peggy Carter’s work as a spy, and now it’s time to learn a bit more about her home life.

Agent Carter‘s earlier trailers indicate the show will be a kind of 1940s espionage caper, while actress Hayley Atwell’s Twitter hints at plenty of badass stunts. One of the big differences between Agent Carter and something like Agents of S.H.I.E.L.D. (aside from the whole 1940s thing, obviously) is that Peggy Carter still has to maintain a “normal” personal life. So while the superheroes of the Marvel Cinematic Universe don’t have to maintain secret identities, the everyday human Agent Carter can’t tell anyone about her double life as a spy.

With Carter working at the male-dominated Strategic Scientific Reserve (a precursor to S.H.I.E.L.D.), most of the show’s main female characters will come from the boarding house where she lives. This clip introduces us to Carter’s roommate, played by Ashley Hinshaw, who thinks Carter works for a telephone company.

We’re curious how long it will be before one of Carter’s friends inevitably gets suspicious about the pistol she’s hiding in her jewelry box—or why her supposedly harmless office job leads to so many weird injuries.