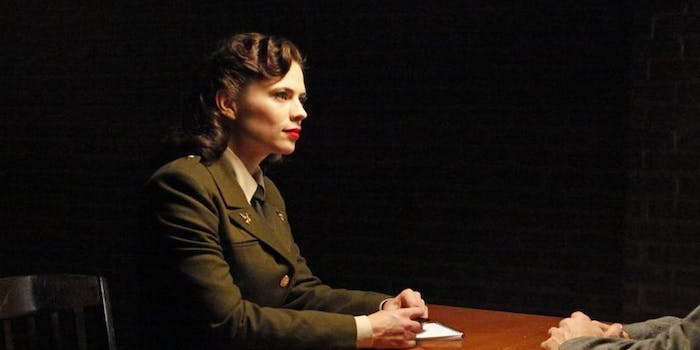 Next week's Agent Carter may include a Black Widow connection. But were the hints already there?

Agent Carter already has close ties to Iron Man and Captain America, but next week’s episode of the Marvel miniseries may introduce an unexpected link to another Avenger: Black Widow.

The episode’s trailer shows Carter and Captain America’s Howling Commandos traveling to Russia to investigate a group of young girls with terrifying assassination skills. Could this be the Red Room, the comic book origin of Black Widow’s training?

In the comics, the Red Room is a Soviet facility that experimented on children, turning them into lethal spies and assassins. They not only trained Black Widow but also gave her physical enhancements like extreme longevity. This is why she still looks young, despite being over 70 years old. It’s also how her character remains thematically linked with the Cold War.

The movie version of Black Widow, who goes by the name Natasha Romanoff, isn’t quite that old; she’s listed as being born in 1984. But judging by next week’s Agent Carter—plus the ballet scene in the Age of Ultron trailer, another Red Room reference—the Marvel Cinematic Universe is getting closer to revealing some of Romanoff’s backstory. It’s just too bad that she’s probably not going to get a solo movie of her own.

Agent Carter fans have been looking for Red Room hints ever since last week’s episode introduced Peggy Carter’s new neighbour, Dottie Underwood. She seemed kind of ditzy at first, but since she was introduced as an aspiring ballerina (despite being played by a tall-ish actress in her thirties), some viewers immediately suspected she was a Red Room operative.

And wouldn’t you know it, this week’s episode showed her snapping the neck of a man who was trying to kill Carter. Where do her loyalties lie? We have no idea. But right now, signs point away from the Marvel’s recent love of 1940s HYDRA storylines and toward Black Widow’s origins in the Cold War.