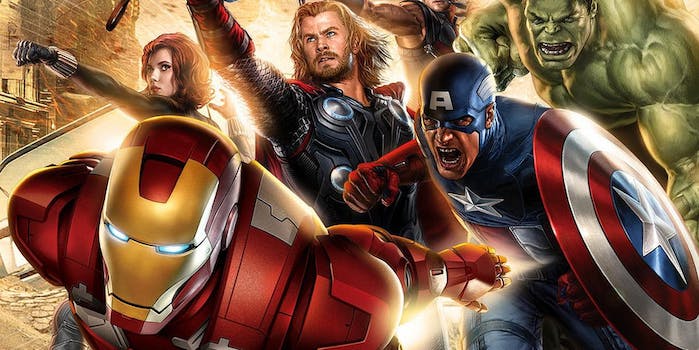 With just under a year until Avengers: Age of Ultron comes out, Marvel Studios is beginning to share a few tidbits of information about this movie.

In this week’s Entertainment Weekly Comic-Con preview issue, Robert Downey Jr. and Avengers director Joss Whedon give a basic explanation of how the new villain Ultron will be introduced into the Marvel Cinematic Universe.

EW’s cover also shows Iron Man and Captain America’s new costumes, which in Cap’s case means a new outfit with the Avengers logo on the shoulder. That’s presumably a Stark-funded uniform, since he’s obviously no longer getting his clothes from S.H.I.E.L.D.

.@Avengers: #AgeOfUltron: On the set of @Marvel‘s biggest movie ever for our #SDCC preview: http://t.co/a9WRHDxauA pic.twitter.com/y3JABhefyP

Voiced and performed by James Spader using motion-capture technology, Ultron is an artificial intelligence created by Tony Stark to defend the Earth now that S.H.I.E.L.D. is gone. It sounds like Ultron will be something like Tony’s A.I. butler JARVIS, except in control of a fleet of humanoid robot drones. But as we’ve learned from about a million sci-fi movies before, leaving humanity at the mercy of a weaponized artificial intelligence rarely ends well. Ultron decides that the best way to save the world is to eradicate humanity.

“Ultron sees the big picture and he goes, ‘Okay, we need radical change, which will be violent and appalling, in order to make everything better’,” Whedon told EW.

Ultron’s army of robot drones look suspiciously similar to the Sentinels in X-Men: Days of Future Past, which were programmed to kill all mutants. This follows on in the classic blockbuster tradition of several movies using a similar idea all in a row, much like when Avengers, Skyfall and Star Trek Into Darkness all saw their villains trick the good guys by allowing themselves to be trapped inside perspex prison cells.

Robots aside, some of Robert Downey Jr.’s comments suggest that Age of Ultron will have a darker emotional tone than the first Avengers movie. And of course, there have already been a lot of rumors that a major character will die this time round.

Tony Stark’s character arc between Avengers and Iron Man 3 already focused heavily on his struggle with PTSD, and Ultron seems to be the next step in that journey. Tony Stark doesn’t really want to go around being a superhero any more, because as Downey says, “The downside of self-sacrifice is that if you make it back, you’ve been out there on the spit and you’ve been turned a couple times and you feel a little burned and traumatized.”

EW’s cover story also shares some details on Quicksilver and Scarlet Witch, about whom we’re sure to learn more once Comic-Con is in full swing.