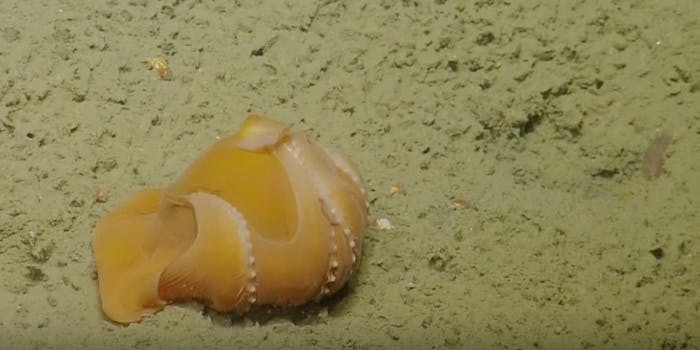 In June, the NPR show Science Friday shined the spotlight on a critter that spends most of its time in the dark: An undescribed species of flapjack octopus that is so utterly cute, researchers are considering naming it “adorabilis.”

Recently, the exploration vessel Nautilus, an expedition to observe and catalogue the deep sea around the Americas, came upon the unofficially named Opisthoteuthis adorabilis. Even the seasoned marine biologists of the research vessel were reduced to jelly by the octopus’s squishy cuteness.

Stephanie Bush, the scientist studying the species at the Monterey Bay Aquarium Research Institute, confirmed that the animal in the video was indeed the “adorabilis” species she’s researching.

“It is certainly in the genus Opisthoteuthis, which are known as flapjack octopuses,” Bush told the Daily Dot in an email. “They are called dumbo octopuses sometimes, as here in the video clip, but that usually refers to members of the genus Grimpoteuthis.”

Bush said that this isn’t usually a problem for octopuses and their cousins in the cephalopod classification (squids, cuttlefish, and nautilus) because their hard beak is already pretty small. But she said she had heard unconfirmed reports that parts of worms sometimes turned up in the brains of cephalopods.

“The blinking of the left eye and the covering of the eye and part of the mantle with the arms and web are a response to the bright lights of the ROV [remote operated vehicle],” Bush added. “Outside of that, what you see in the video is pretty normal behavior—they spend a fair bit of time sitting on the bottom. We do see them swimming and drifting in the water column, but most often find them on the bottom.”

Bush said that she’s not sure if the species will definitely receive the official name “adorabilis” once it’s been fully described. But in our hearts, it will always be known as Squishy, the Adorabilist Octopus.