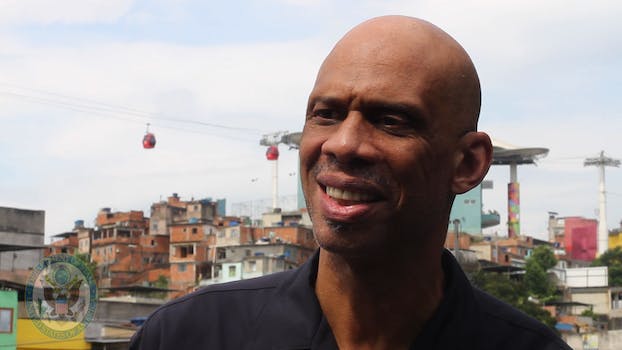 Mycroft Holmes is his first novel, co-written with screenwriter Anna Waterhouse. The story focuses on (obviously) Sherlock’s brother Mycroft, and takes place several years before the earliest works by Arthur Conan Doyle. As a young man, Mycroft Holmes travels to Trinidad to investigate a series of mysterious disappearances, and to follow his Trinidadian fiancee, Georgiana.

Abdul-Jabbar played for the L.A. Lakers and the Milwaukee Bucks, and was a 19-time NBA All-Star before retiring in 1989. He went on to appear on TV and film, has written or co-written several books including a bestselling autobiography, and was appointed a United States cultural ambassador in 2012. And now, he’s writing fanfic. Mycroft Holmes is his first novel, borne of a decades-long love for the Sherlock Holmes stories. “I was fascinated by Holmes’s ability to see clues where other people saw nothing,” he said, in a statement regarding the book.

There are plenty of Sherlock Holmes stories on the market these days, as most of the series is now in the public domain. A recent example is Moriarty by Anthony Horowitz, which takes place shortly after Sherlock Holmes’ apparent death at the Reichenbach Falls. However, Mycroft’s status as a more minor character means he rarely takes center stage in modern Holmes novels, so Abdul-Jabbar’s novel should not have too much competition. And the Trinidadian setting sounds a lot more interesting than yet another retread of Victorian London.

Photo via U.S. Department of State/Wikimedia