You can’t stop Universal from taking down your YouTube videos

Thanks to a deal between Universal Music and YouTube, Universal can take down videos without YouTube's usual appeals process.

In 2011, a New Jersey YouTuber named John McKelzey had what he considered to be a completely legal video removed from YouTube because it violated the site’s terms of use.

Last week, he learned that agreements between the Google-owned site and Universal Music Group may have destroyed any chance of reinstating his video on YouTube, no matter how legitimate his case may be.

The video was like nearly every other video that’s shown up on McKelzey’s YouTube channel over the past five years: a multimedia review of a hip-hop album that blends McKelzey’s own take on the album with short, low-quality audio snippets, many of which last less than less than a minute. In the case of the deleted video, the album McKelzey reviewed was the 12″ single for Eric B. and Rakim’s iconic “Eric B. is President,” a pressing that put the Long Island duo’s “My Melody” on the back side.

YouTube flagged this video immediately, however, and deleted it on the grounds of copyright infringement. Universal Music, which owns the rights to a handful of Eric B. and Rakim’s master recordings, filed a DMCA (Digital Millennium Copyright Act) takedown of the video, rendering it unusable on the Internet’s largest video-sharing site. 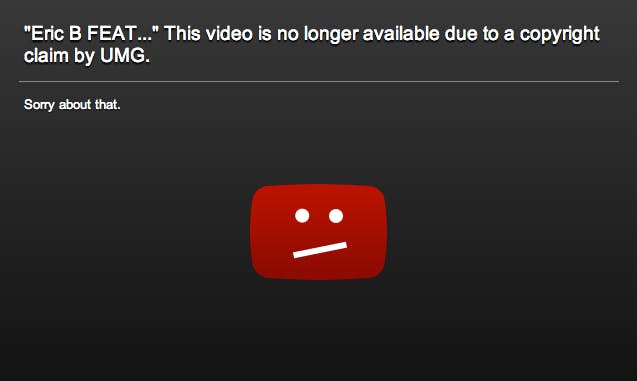 McKelzey tried to argue that the review fell under fair use, the doctrine that allows for the use of copyrighted material so long as the interpreter adheres to a number of practical guidelines, but his pleas largely went unacknowledged.

“There’s not a strict rule delineating fair use and not fair use,” he told the Daily Dot. “There’s a whole list of things. One component that I believed helped my cause was that it was in the context of a critical review, which is how Roger Ebert was always able to play movie clips in his reviews.

“It was also non-competitive: you wouldn’t play my video instead of the song, because it was such a short sample and it wasn’t very high quality. And it was non-commercial.”

YouTube wouldn’t hear it, and despite a series of counter notification attempts to reinstate the video, McKelzey’s Eric B. and Rakim review never made it back onto the site.

Last October, McKelzey’s fight was given a second chance.

YouTube made a change to the policies of its massive (and massively flawed) Content ID system—the software that automatically flags copyrighted material on the site—on Oct. 3, one that McKelzey believed would “humanize” the copyright appeals process. Now, when a user wanted to file an appeal, the claim would go directly to the copyright holder. That copyright holder could in turn release the claim or file a formal DMCA takedown.

McKelzey thought that the change would mean that his video could once again see the light of day. He filed another appeal to the site. A few days later, he received an email telling him that “the complainant has reaffirmed the information in its DMCA notification.

“YouTube has a contractual obligation to this specific copyright owner that prevents us from reinstating videos in such circumstances.”

McKelzey was directed to a Google support page, where he could learn more about YouTube’s deal with Universal:

“YouTube enters into agreements with certain music copyright owners to allow use of their sound recordings and musical compositions.

In exchange for this, some of these music copyright owners require us to handle videos containing their sound recordings and/or musical works in ways that differ from the usual processes on YouTube. Under these contracts, we may be required to remove specific videos from the site, block specific videos in certain territories, or prevent specific videos from being reinstated after a counter notification. In some instances, this may mean the Content ID appeals and/or counter notification processes will not be available. Your account will not be penalized at this time.”

McKelzey said that he doesn’t know which other companies have similar agreements with YouTube.

“They obviously wouldn’t give me any information about it,” he said. “I suspect it’s different for every label.”

The problem for McKelzey now is that he’s picked up a strike in YouTube’s two-strike system. According to the site’s Terms of Service, YouTube can terminate an account if its found to be in violation of site rules more than once.

“Now I’m on their radar even though I don’t believe I did anything wrong,” McKelzey said.