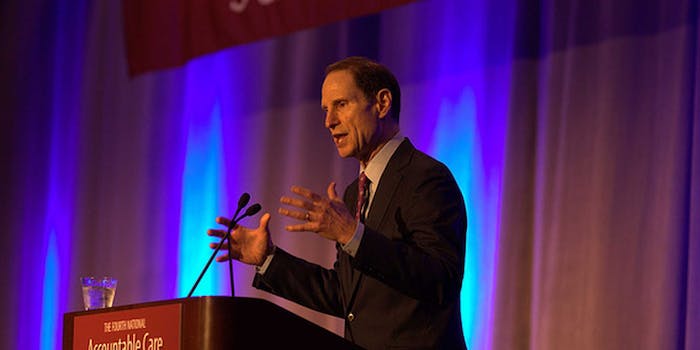 Sens. Ron Wyden (D-Ore.) and Mark Udall (D-Colo.) take issue with an NSA fact sheet on PRISM. But they can't say why, because it's classified.

The NSA doesn’t want you to worry.

To ease your fears, it created a handy list of bullet points demonstrating that, under section 702 of the Foreign Intelligence Surveillance Act (FISA), it can’t use the PRISM surveillance program to target Americans.

But Senators Ron Wyden (D-Ore.) and Mark Udall (D-Colo.) disagree, and wrote in an open letter to the NSA Monday that one of those points is “an inaccurate statement.” The irony is that because much of information on PRISM is classified, they can’t tell you which of the NSA’s claims is wrong.

The NSA has since pulled the fact sheet from its website. However, a cached version is still available via the Internet archive, where the Daily Dot found it and re-uploaded it. Both the NSA fact sheet and the senators’ responses are embedded below.

Those two senators would know if something were amiss with the NSA’s claims. They’re both on the Senate Intelligence Committee and, according to a senior administration official, both senators were briefed on PRISM in March 2012.  Wyden has clamored that Americans would be aghast to learn what kind of surveillance the NSA conducts since at least 2008.

Then two senators identified which of those issues they found incorrect in an attachment to the letter—but because it referred to classified information, they didn’t make that part public.

The NSA’s list is clearly an effort to combat fears that PRISM, revealed to the public by whistleblower Edward Snowden, tracks and stores every American’s Internet movements. Its points include:

“This authority allows only the targeting, for foreign intelligence purposes, of communications of foreign persons who are located abroad.”

“There must be a valid, documented foreign intelligence purpose, such as counterterrorism, for each use of this authority. All targeting decisions must be documented in advance.”

Wyden and Udall were able to publicly specify one point they contested, though: the ninth point, which reads:

“Any inadvertently acquired communication of or concerning a U.S. person must be promptly destroyed if it is neither relevant to the authorized purpose nor evidence of a crime.”

“We believe this statement is somewhat misleading, in that implies that the NSA has the ability to determine how many American communications it has collected under section 702, or that the law does not allow the NSA to deliberately search for the records of particular Americans.”

Wyden has for years sought to declassify how many American communications the NSA has accidentally acquired, but the NSA has repeatedly said they couldn’t make an estimate.