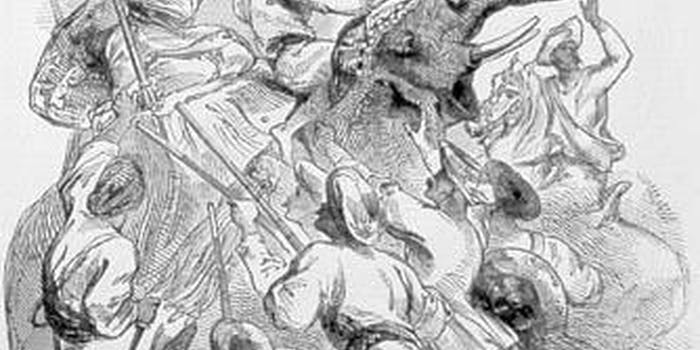 Wikipedia editors finally remove an article about a battle that never actually happened.

Up until a week ago, here is something you could have learned from Wikipedia:

From 1640 to 1641 the might of colonial Portugal clashed with India’s massive Maratha Empire in an undeclared war that would later be known as the Bicholim Conflict. Named after the northern Indian region where most of the fighting took place, the conflict ended with a peace treaty that would later help cement Goa as an independent Indian state.

Except none of this ever actually happened. The Bicholim Conflict is a figment of a creative Wikipedian’s imagination. It’s a huge, laborious, 4,500 word hoax. And it fooled Wikipedia editors for more than 5 years.

But even exposed and deleted, Wikipedia’s influence over the Web is such that the Bicholim Conflict continues to persist, like a resilient parasite.

The perpetrator of the hoax is a mystery. Wikipedia admins deleted the edit history along with the article. Users of the Wikipediocracy forum have pinned down a likely suspect, however, a Wikipedian who went by the handle “A-b-a-a-a-a-a-a-b-a.” He or she authored a big chunk of the article’s text, and also nominated it for “featured Article” standing in October 2007, writing:

“I’m nominating this article for featured article because after much work I believe it has reached its maximum potential. It is not a very huge event and doesn’t have more than a few chapters in literature based on it but I’ve still created the article to quite a good size.”

“Featured Article” status is a bit of a badge of honor on Wikipedia, a recognition bestowed to only the highest quality pieces on the site. Out of more than 4 million English Wikipedia articles, only 3,772 are “featured.” Thankfully the Bicholim Conflict didn’t pass muster—editors who reviewed it cited an overreliance on a few weak sources, never realizing that those sources never existed in the first place.

And the Bicholim Conflict was still labelled a “Good Article,” a status it had received just two months after being created in July, 2007. That status is a step down from featured, but still a designation given to less than 1 percent of all English-language articles on the site.

Enter Wikipedian-detective ShelfSkewed, who decided in late December, for no apparent reason, to delve into the article’s sources. What he found was pretty amazing: None of the books used as source material in the article appeared to exist.

On Dec. 29, 2012, ShelfSkewed nominated the whole thing for deletion:

After careful consideration and some research, I have come to the conclusion that this article is a hoax—a clever and elaborate hoax, but a hoax nonetheless. An online search for “Bicholim conflict” or for many of the article’s purported sources produces only results that can be traced back to the article itself. Take, for example, one of the article’s major sources: Thompson, Mark, Mistrust between states, Oxford University Press, London 1996. No record at WorldCat. No mention at the [Oxford University Press] site. No used listings at Alibris or ABE. I can find no evidence anywhere that this book exists.

He or she added: “Ridiculous.”

Six other editors agreed. And with that, the five-and-a-half-year lie was finally snuffed out of existence.

A half-decade sounds like a long time. But while impressive, seven other Wikipedia hoaxes have actually lived longer. These include an article on a supposed torture device called “Crocodile Shears” (which persisted for six years and four months) and one on Chen Fang, a Harvard University student who, intent to demonstrate the limitations of Wikipedia, named himself the mayor of a small Chinese town. It took more than seven years for Wikipedia editors to finally strip Chen of that mayorship.

And then there’s the case of Gaius Flavius Antoninus, whose Wikipedia page described him as a perpetrator in one of the most famous events in history—the assassination of Julius Caesar. “He was later murdered by a male prostitute hired by Mark Antony,” the Wikipedia entry told us. Antoninus, like the Bicholim Conflict, never existed. The hoax evaded Wikipedia’s legions of volunteers for more than eight years, until it was finally uncovered in July, 2012, and similarly purged from existence.

Except, not really. While Wikipedia editors do their best to battle the army of trolls and vandals who disrupt the millions of articles on the site, the scams continue to live on elsewhere. There is a small club of Wikipedia copycat sites on the Internet, which scrape, copy, and paste the encyclopedia’s content en masse to their own sites, then plaster it with ads (copying Wikipedia content is legal under its Creative Commons license).

So while the Bicholim Conflict is now dead on Wikipedia, it still persists on the “New World Encyclopedia” and “Encyclo“.