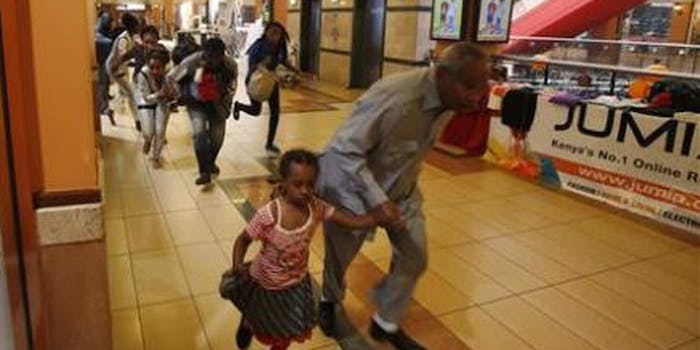 An estimated 59 people have been killed and 49 are unaccounted for in an ongoing terrorist attack at Nairobi, Kenya’s Westgate Premiere Shopping Mall, NPR reported.

Al Shabaab, the Somali-based, Al Qaeda-affiliated terrorist group deemed responsible, has been suspended from Twitter for violating the company’s terms of service after making “specific threats of violence against others.”

The account, @HSM-Press, was being used by the group to advertise and justify the attack as it began. It’s the latest in a series of Twitter accounts the propaganda arm of the group, “HSM Press Office,” has utilized. Each of Al Shabaab’s Twitter accounts have been shut down three times this year, mostly for talking about and encouraging the murder of its enemies on the platform.

In January, Twitter cancelled @HSMPress. The group used it to post photos of a French commando they killed and to threaten Kenyan hostages.

@HSMPress1 was shut down earlier this month after threatening to murder Somalia’s current president, who enjoys international support.

Other suspended accounts include @HSM_Press.

As @Support_Anon notes, the group has a number of current Twitter accounts, a kind of communications redundancy, built into their operations. These include @HSM_PressOffice, @HSM_Superstars, @HSMPress_arabic, and @HSM_PRESS2.

The rationale for the attack was the invasion of southern Somalia by the Kenyan military in 2011, which shut down most of the the group’s bases.

Among the tweets issued prior to the current account’s shutdown were “The Mujahideen entered #Westgate Mall today at around noon and are still inside the mall, fighting the #Kenyan Kuffar (infidels) inside their own turf” and “What Kenyans are witnessing at #Westgate is retributive justice for crimes committed by their military,” according to AFP.

So far, 59 people are determined to have been killed at the Israeli-owned mall, including Ghanaian poet and former UN envoy Kofi Awoonor and many foreigners who were working as diplomats or for international companies. Two French citizens, three British, two Canadians, and a Chinese woman were killed, in addition to dozens of Kenyans, and the Chinese woman’s child was wounded.

Red Cross has estimated the injured at around 200. Within the last hour, Israeli commandos have joined their  Kenyan counterparts in an effort to end the siege, though there is no sign that it is yet over. An explosion of unknown provenance was reported at about the same time, along with accounts of helicopters flying low over the mall.

There were an estimated 1,000 customers in the high-end mall when the shooting began.

The mall is in the upscale Westlands area of the Kenyan capital. Apparently, 10 to 15 terrorists jumped from two vehicles and separated into two teams of shooters, who separated onto different levels and killed patrons with guns and grenades.

According to escaped witnesses, the terrorists told all the Muslims to identify themselves and that they’d be released. The rest were shot at and grenades were thrown into knots of bystanders. Some customers hid and later escaped or were helped out by law enforcement.

Surviving terrorists remain holed up with several dozen hostages, according to the latest reports.

Update: The death toll continues to rise. It currently stands at 68.