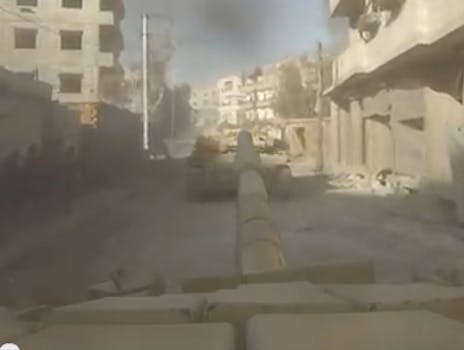 On YouTube, professional and amateur videos provide a rare look at the conflict in Syria.

Featured Video Hide
Advertisement Hide
Advertisement Hide
Since Syria’s armed unrest began in earnest some two years ago, amateur video shot by FSA forces has been filtering out of the country as they continue to clash with army forces loyal to President Bashar al-Assad. Often, these videos depict scenes of intense urban warfare, and it’s not uncommon for these rebel groups to boast of recent upsets against the Syrian army.

By contrast, both the government and the army have been fairly mum regarding their operations, which is why it was unusual when several videos shot directly from Syrian mechanized units surfaced via the Abkhazian Network News Agency on YouTube.

ANNA, a Russian-language news outlet based out of the disputed territory of Abkhazia on the eastern coast of the Black Sea, seems to have regular access to Syrian army personnel, as its YouTube channel offers a long list of interviews with hospital patients. (See: “Wounded, but not broken,” which is particularly stark.) Its most recent videos depict the army’s offensive in Dariyya, a suburb of Damascus, and offers a remarkable view into the ongoing violence that has swept through the entire country.

Consultation with various sources within and outside Syria suggests that the videos are authentic, and correlate with the army’s recent operations on February 14th and 15th. The fact that the clips made their way to the web via ANNA, an outlet which is unapologetically pro-Assad, only a few days later suggests that they were purposely leaked, if not directly handed over to the news agency.