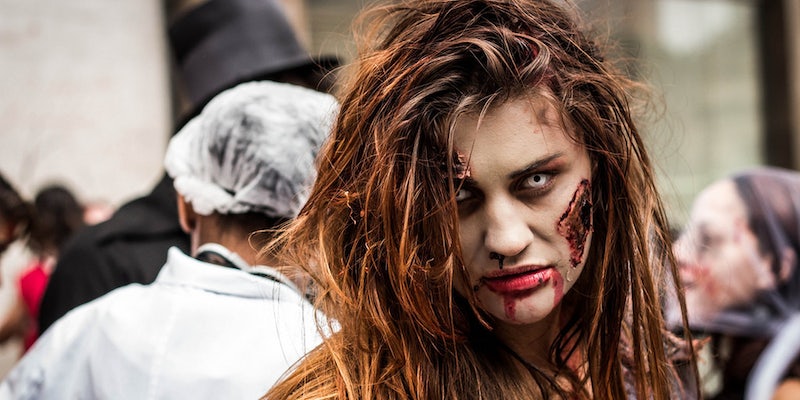 If the U.S. is ever attacked by evil magic zombies, or even the relatively tame creature that is a chicken zombie, rest assured that the Department of Defense has it covered.

Seriously, a document has apparently been unearthed by Foreign Policy magazine that appears to show either the incredible level of preparedness of the U.S. national security community, or it demonstrates how the people tasked with keeping the nation safe are insane.

The zombie attack training manual, “CONOP 8888,” or “Counter Zombie Dominance,” is dated April 2011, and was supposedly found buried on a secret military computer. It tells military planners how to defeat an invasion of flesh eaters, and how to preserve the sanctity of “non-zombie life.” From magic zombies to chicken zombies, even vegetarian zombies, they’re all in the file, with a plan for how to take them out.

“Zombies pose a threat to all non-zombie human life,” says CONOP8888. “[Strategic Command] will be prepared to preserve the sanctity of human life and conduct operations in support of any human population—including traditional adversaries.”

While the manual says in its disclaimer that “this plan was not acutally designed as a joke,” it still kind of is. What the intelligence community has done here is use “zombie” as a kind of codeword for “enemy,” so as not to look like the Pentagon is planning for an invasion of a particular country, religion, or plague.

To prepare for all possible situations, it says, “We elected to use a completely-impossible scenario that could never be mistaken for a real plan.”

All of which begs the question, of course, if zombies are being used as metaphors for real threats, what the hell are “Vegetarian zombies” doing in there?

Chicken zombies could, of course, mean avian bird flu, and evil magic zombies could easily be a thinly veiled reference to Al’ Qaeda or some other real enemy. But there can be no such thing as a vegetarian zombie. And second, what threat do vegetarians pose, either in this universe or the one inhabited by the person who wrote this manual?

In fact, according to the military zombie survival guide, vegetarian zombies “pose no direct threat to humans because they only eat plant life,” which makes makes total sense.

Perhaps most remarkable about Counter Zombie Dominance manual is that former Vice President Dick Cheney doesn’t appear once. Not once. Or is he the Evil Magic Zombie? AAAARGH!

Photo via Grmisiti/Flickr (CC BY 2.0)