The Atlantic backtracks on Scientology advertorial

The Atlantic admits it has "screwed up" after publishing a Church of Scientology–sponsored story and moderating comments in a suspicious manner.

The Atlantic admits it has “screwed up” after publishing a Church of Scientology–sponsored story and moderating comments in a suspicious manner.

The hollow mea culpa comes after the 156-year-old glossy pulled the story-like advertisement praising Scientology leader David Miscavige. The advertisement caused a stir on social media in which many questioned the magazine’s ethical standards. 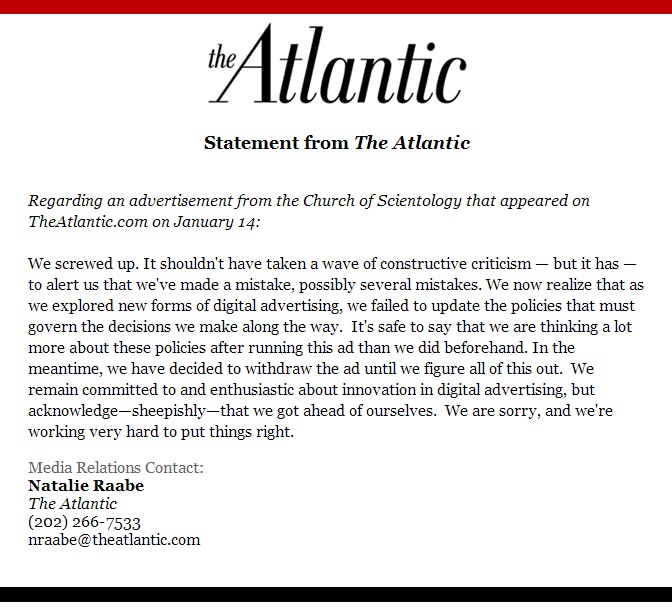 The now-deleted advertisement (which is also known as an advertorial) praised Miscavige as the “driving force behind this unparalleled era of growth” in the church. The lengthy piece also included photos of 12 new churches it had opened in 2012. (Read a screenshot of the full article here.)

The Atlantic published the article Monday around 12:25pm ET and labeled it “sponsor content.” The article collected the following comments, which “appeared to be exclusively supportive of Scientology,” Poynter noted. 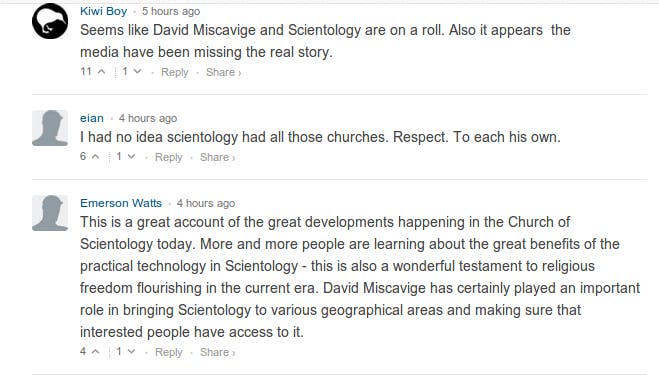 After a handful of journalists raised concerns over the content moderation, Natalie Raabe, a spokeswoman for The Atlantic, explained, “Our marketing team was monitoring some of the comments.”

The article was officially taken down at 11:30pm ET Monday. In its place is the following message:

We have temporarily suspended this advertising campaign pending a review of our policies that govern sponsor content and subsequent comment threads.

Over the years, Scientology has been a lightning rod for controversy and criticism. One of its staunchest critics has been The Atlantic.

Sponsored advertorials have become a mainstay at news organizations like Gawker and BuzzFeed. The practice has been controversial because it integrates ads so well that they are often mistaken for news articles. And most go unnoticed, which is something Salon’s Alex Pareene alluded to on Twitter.

According to Gawker founder Nick Denton, there’s no real difference. “Scientologists unlikely to brave Gawker,” he tweeted. “But I don’t see why they can’t buy ads—or participate in discussions.”

“[Atlantic editor in chief] James Bennet’s editorship has been a model for others. But advertorials in the Atlantic? For cults?” Sullivan wrote on his blog, currently hosted by the Daily Beast. “What I’d like to know is how extensive the use of advertorials now is at my former beloved home. Maybe this was a one-off, quickly ended. Or maybe it wasn’t.”