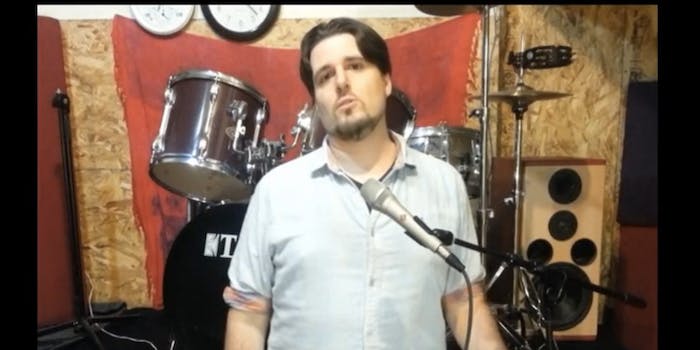 The backlash has begun against Reddit pick-up artist Ken Hoinsky’s forthcoming book Above the Game: A Guide to Getting Awesome With Women.

We talked to Hoinsky in early June about his project, based off advice in Reddit‘s r/seduction forum, whose Kickstarter for the book met its $2,000 goal within 24 hours. As of today, it’s sitting at more than $15,000 to finish out the project. Comedian and video game designer Casey Malone took to Tumblr early this morning with a post about elements of Hoinsky’s advice that border on sexual assault.

In a viral post called “This Is Not Fucking Harmless,” which in nine hours garnered more than 3,000 notes, Malone explains the consent issues that make parts of Hoinsky’s book problematic.

“This is a nightmare,” Malone wrote after seeing Hoinsky’s Kickstarter. “Watching the video, reading the description, it sounds fairly innocent but a little eye-roll inducing. It’s another book where some nerd, desperate to be liked by women (this is not an insult, we are ALL desperate to be liked by someone we want to have sex with) thinks he’s figured out some cheat code or check-list like routine they can run in a bar to make women sleep with them, as if women aren’t people but a series of subroutines or an obstacle course that they can optimize to get their dick wet as fast as possible. And he’s written that advice down! And he’s selling it! To you! You could learn his cheat codes. This is nothing new for the Internet. In fact, a large swath of this book was published already on Reddit. What’s new is that he’s crowdfunding it.”

A source at DoSomething.org said the site is planning to launch a petition asking for the removal of Hoinsky’s book from Kickstarter, and requesting he not recieve the funds. The non-profit toyed with also asking to allocate the money to RAINN, the Rape, Abuse, and Incest National Network, but Kickstarter’s rules don’t allow transferring the use of the money raised.

Malone cites Part 5 of the book titled “Get CLOSE to Her, Damn It!”:

Decide that you’re going to sit in a position where you can rub her leg and back. Physically pick her up and sit her on your lap. Don’t ask for permission. Be dominant. Force her to rebuff your advances. …

Pull out your cock and put her hand on it. Remember, she is letting you do this because you have established yourself as a LEADER. Don’t ask for permission, GRAB HER HAND, and put it right on your dick.

“He’s writing a book about how to sexually assault women,” Malone explained, “and he is using something I believe in (Kickstarter) to ask YOU for money to do it. I am offended as someone who believes in the platform, and more importantly I am offended as someone who believes women shouldn’t be treated this way, and that people who say otherwise CERTAINLY should not profit off saying they should.”

This isn’t harmless. People come to these boards because they are scared of being humiliated, and they are saying to the world, “Tell me what to do, because I don’t know what to do.” And this guy has chosen to tell them, “You should be a rapist.”

Malone encourages people to contact Kickstarter on Twitter, report Hoinsky on the site, and ask for the book to be taken down before the deadline this afternoon.

In an interview with the Daily Dot, Malone said he’s sure Hoinsky is unaware that what he’s doing is “harmful and repugnant” because he think he’s helping men become more aggressive with the women they’re interested in. He said he has not had any direct contact with Hoinsky since the post went up. Malone said he loves Kickstarter for allowing game creators to make new indie games, so he was especially disturbed to see Above the Game succeeding on the crowdfunding site.

“It’s all part of this insane pick-up artist ‘culture.’ None of the things he’s saying are new, but I am so grossed out by him trying to crowdfund this borderline hate speech on a platform I believe in,” Malone wrote. “I can’t stop people from being gross on the Internet. But maybe we can say, ‘Take this horrible shit somewhere else.’”

Hoinsky said in an email that he’s been fielding hate mail all morning. “I just point out that I have a whole section on consent in the book that hasn’t been published yet and thank them for their feedback,” he wrote.

According to Malone, Hoinsky took down some of the questionable portions, which is confirmed by the Google Cache versions of the page. Hoinsky said, “I temporarily made three Reddit posts offline because they were being linked out of context.”

He linked to a response to Malone’s post by another Tumblr user claiming that Malone, along with the rest of Tumblr, is overreacting to quotes from Hoinsky’s book taken out of context.

User audieoddity quotes these sections on consent from Hoinsky’s book:

IMPORTANT NOTE ON RESISTANCE: If at any point a girl wants you to stop, she will let you know. If she says “STOP,” or “GET AWAY FROM ME,” or shoves you away, you know she is not interested. It happens. Stop escalating immediately and say this line: “No problem. I don’t want you to do anything you aren’t comfortable with.” Memorize that line. It is your go-to when faced with resistance. Say it genuinely, without presumption. All master seducers are also masters at making women feel comfortable. You’ll be no different. If a woman isn’t comfortable, take a break and try again later.

She writes in response to Malone:

Now I’ll admit I didn’t intensively read through the whole thing, but I skimmed through most of it and let me point out a good majority was just how to make a basic conversation and get the girl to know you’re interested (ask her about her day and hobbies) The only part I found mentioning dicks was the part literally for sex, it’s not like he’s saying, “Walk up to that hot chick at the bar and assault her” … this section actually says it’s meant for after a date and it doesn’t start out that way it leads into initial touch, kissing, and then this area. Once again, Tumblr overreacts.