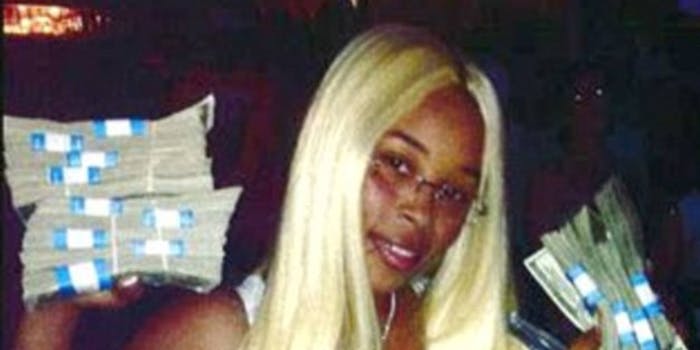 Facebook’s “queen of tax fraud” gets 21 years in prison

Rashia Wilson pled guilty to stealing $3 million from the IRS.

The self-proclaimed “queen of tax fraud” who brazenly taunted police on Facebook  has been sentenced to 21 years in prison for tax fraud.

Rashia Wilson, a 27-year-old mother of three in Wimauma, Fla., may been have been a braggart, but she wasn’t exactly lying. Wilson’s sharp eye for the con saw her rise to the very top of a Tampa tax fraud boom in the late 2000s. Over just three years, she and her boyfriend defrauded the IRS of at least $3 million with bogus tax returns, funding a lavish lifestyle that included $10,000 on her youngest son’s birthday party, a $90,000 car, and a necklace that spelled out her name in jewells.

Court affidavits showed how Wilson brazenly taunted authorities on Facebook even as they were zeroing in on her operations. In one, decked out with that necklace and flashing wads of cash, she bragged:

I’m Rashia, the QUEEN OF IRS TAX FRAUD. I’m a millionaire for the record, so if U think indicting me will B easy it won’t, I promise you! U need more than black and white to hold me down N that’s to da rat who went N told, as if 1st lady don’t have da TPD under her spell. I run Tampa right now.

After Wilson pleaded guilty to identity theft and wire fraud on July 16, her legal team urged leniency, saying her rough childhood as the daughter of a crack addict left her with bipolar disorder. U.S. District Judge James. S. Moody Jr. wasn’t having it. After ordering Wilson to spend the next two decades of her life in prison, he forbade her from hugging her children. She broke down in tears.

“She knew what she was doing was wrong. She reveled in the fact that it was wrong,’ Moody said.