Wikipedians accuse Qorvis of employing a small crew of sockpuppets to fan out across the free encyclopedia and attempt to whitewash the pages of its clients.

An American public relations company has been caught allegedly fluffing up Wikipedia pages for clients that include powerful governments from around the world. For Wikipedians, the case shows just how far the regimes and their Western proxies will go to manipulate their image on the sixth most popular website in the world

Last week, Wikipedians uncovered a string of puppet accounts they said belonged to the staff of Qorvis, a Washington D.C.-based company best known for massaging the public image of dictatorships from Bahrain to Saudi Arabia.

In a scathing post published to the company’s official blog, Qorvis partner Matt J. Lauer denied the allegations and ripped into the encyclopedia’s editing policies, saying Wikipedia provides no avenue for article subjects to defend themselves against grievous errors and slander.

“This is a serious flaw and a real challenge for a site that has become a fundamental source for so many around the world,” Lauer wrote.

Wikipedia enables the spread of “blatantly false” information, Lauer said, because it prohibits article subjects from editing their own pages and yet dominates Google search results about them.

Look no further than the Qorvis Wikipedia page itself, Lauer suggested, calling it a “real yarn.” There, Wikipedia claimed that Qorvis both employs hundreds of Wikipedia editors and that its CEO was nicknamed “The Super Gypsy”—statements that were, according to Lauer, “quite obviously false—and damaging to our company, clients, and the public.”

But is the situation as cut and dry as Qorvis would have you believe, or is Lauer’s public response just clever PR obfuscation? Wikipedia cofounder Jimmy Wales certainly isn’t buying his excuses, telling Lauer via Twitter: “Your complaints are deeply dishonest to the point of being embarrassing. Your clients should fire you for it.”

Wikipedians accuse Qorvis of employing a small crew of sockpuppets—multiple accounts owned by the same user to deceptively orchestrate an editing bloc—to fan out across the free encyclopedia and attempt to whitewash the pages of its clients.

Here is just a sampling of Wikipedians’ voluminous evidence, which they’ve been gathering from as far back as 2011. Qorvis has claimed it has nothing to do with these accounts.

This is where things get very interesting. Remember Lauer’s claim that some creatively slanderous Wikipedian had written that CEO Michael Petruzzello was known as the “Super Gypsy among the Washington elite?” The Daily Dot discovered that the edit was actually made by the exact same Qorvis IP address listed above: 38.100.14.250. Either inside jokes from Qorvis staffers were leaking on to Wikipedia, or the “Super Gypsy” really is Petruzzello’s nickname. 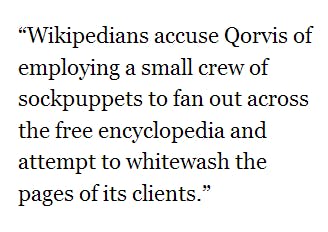 Regardless, the fact that Lauer omitted this key information from his blog post shows that either he’s either being dishonest or is ignorant of what his employees are doing on Wikipedia. Either way, it calls into question everything else Lauer has said about Qorvis’ activity on the site.

A large chunk of that cash comes from foreign governments. Shortly following the terrorist attacks of Sept. 11, Saudi Arabia reportedly signed a $14 million a year contract with Qorvis, charging the company to lead a TV and media blitz in the United States—what Mother Jones would later describe as to putting “lipstick on a dictator.” In 2005, the FBI raided Qorvis’ offices as part of an investigation into whether a series of anti-Israeli ad campaigns allegedly orchestrated by Qorvis on behalf of the Saudi government broke federal law. No charges were filed.

The Kingdom of Bahrain, meanwhile, pays Qorvis about $4.8 million every year to smooth over its image across the world.

Tom Squitieri, the Qorvis employee Wikipedians accuse of running sockpuppet accounts, has a checkered past all his own. In 2005, he was forced to resign from USA Today after he was accused of borrowing quotes from other publications (a case that, in Squitieri’s defense, is not as cut-and-dry as it sounds). After leaving journalism, Squitieri joined Qorvis, where he’s best known for penning essays at the Huffington Post that defended the Bahraini government’s brutal crackdown during the Arab Spring and blamed the protesters for the violence. Those essays became notorious representations of the type of work Qorvis does for its employers. (At no point did Squitieri disclose he was an employee of Qorvis.)

This isn’t the first time Qorvis or a company in its orbit has attracted controversy on Wikipedia. In 2011, British PR firm Bell-Pottinger was caught running a similar scheme on the encyclopedia, editing out negative information from its client pages. Qorvis subcontracted its Bahrain work to Bell-Pottinger until 2011.

All that said, Lauer’s blog post does raise some important points, and he’s absolutely right that Wikipedia could do a much better job providing article subjects tools to defend themselves from misinformation.

Article subjects are forbidden from editing their own pages. Paid advocacy, the type of work PR firms might do for their clients, is highly discouraged. Wikipedia will generally block anyone who registers under a company name, preferring that employees register under their own name, state their conflict of interests on their Wikipedia user page and point out problems on discussion (“talk”) pages in lieu of editing articles themselves. One Wikipedian joked that the encyclopedia’s pages should come with this disclosure: “this is a Wikipedia article about you that anyone can edit—except you.”

“It’s a slippery slope,” Jay Walsh, Wikipedia’s communications head, told the Daily Dot. “Every piece of factual information on WIkipedia is expected to be backed up by a source. But fundamentally we need to know where the information came from.” 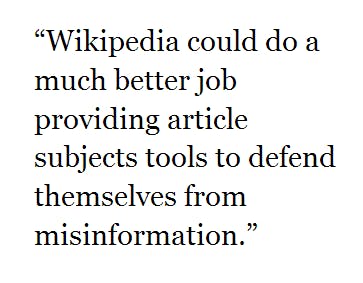 In other words, subjects have an inherent bias when editing articles about themselves. “If we knew this was a common practice, people would have a very tough time trusting Wikipedia,” Walsh said.

Wikipedia’s tools for reporting errors aren’t obvious. You can leave a comment on the article’s talk page, but that won’t necessarily get noticed by an editor, especially on smaller articles. More savvy users can ask for help at Wikipedia’s administrator noticeboard—but realistically, how many article subjects have ever heard of such a place?

Walsh suggests emailing the foundation itself if the problem is really urgent, such as in the case of slander. But the “contact us” link on Wikipedia is buried at the bottom of the site, in a font small enough that some people probably require glasses to read it. There’s no big red button saying “Click here if you are the subject of this article and it is slandering you.”

That said, Qorvis’s PR campaign in the wake of the scandal isn’t helping advance worthwhile discussion about the problem.

“Qorvis is certainly not alone in this battle for truth.” Lauer wrote in his blog post. The fact that a firm like Qorvis—a company that embodies a conflict of interest if there ever was one—-is pursuing its own version of “truth” on Wikipedia may be the best justification for the encyclopedia’s stringent editing rules yet.

Qorvis did not respond to a request for comment on this story.

UPDATE: Qorvis partner Matt J. Lauer said the company never received our request for comment. He directed me to this statement on a separate forum that discussed the controversy. We are reproducing it below:

The point of my piece is that anyone in the world can contribute to an article. This is unless one of two things happens: 1. The editor of the article could be a primary source of the article. 2. The source has a different [point of view] than Jimmy Wales or the majority of Wikipedia editors. I just dont understand why there is a problem hearing from a different side. If the evidence is incorrectly sourced or wrong, other editors will take it out anyway. Everything is perceived as a conspiracy.

On our corporate IP address [thousands] of people have used it over the years. Some of these people are disgruntled employees who want to call our CEO, “Super Gypsy,” others are true believers who edit Wikipedia on their own volition. There was once a shared editing address that a bunch of employees had on their own, but that was used to edit everything from personal volunteer projects, to Harry Potter characters, to clients they may have had a [point of view] on. They have not used that for a few years.

It is no secret that clients with challenges retain Qorvis. These clients are influential people and corporations with some allies and supporters. I am sure some of those people contribute to Wikipedia. And, really, why should they not be able to contribute?

Lauer added via a direct message on Twitter: “[Qorvis] employees may edit Wikipedia and they may not, but we have no corporate policy or interest in making this some kind of profit making venture.”