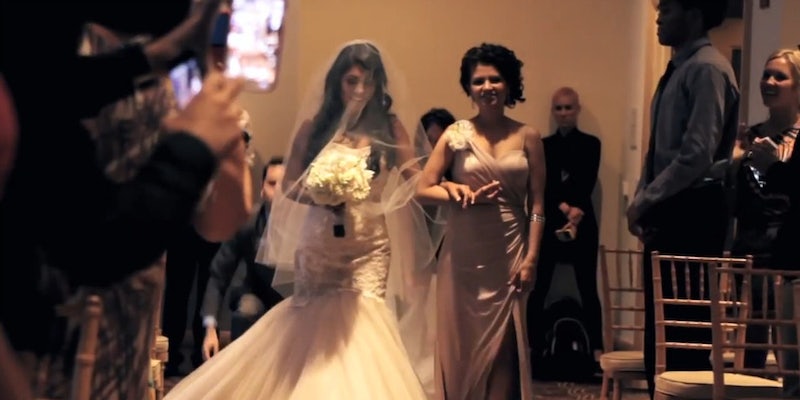 Everything she put on Pinterest came true at her wedding.

Amanda Roman had dreams for her fairytale wedding—and thanks to Pinterest, and its easy categorization and pinning system, she’d made them concrete, to the tune of over 220 pins about what her perfect day would be like.

When her boyfriend of five years, Ryan Leak, overheard her tell a friend that it had always been her dream to get engaged and married on the same day, he was first puzzled, then intrigued. “How does that even work?” he wondered.

Ryan decided to do some investigation. While at first he had nowhere to start, he quickly realized that Amanda had 224 photos on her Pinterest on a board called “My Dream Wedding.”

Amanda’s Pinterest laid out every aspect of the wedding, from the big things like the Dress and the wedding party colors and outfits (“could this please be my mother of the bride or groom dress?!”) to the little details like table centerpieces (“you can get the vases at Dollar Tree for $1 each”) and wedding scrapbooks (“the maid of honor could put this together”).

Amanda even pre-planned her own guest seating (“great arrangement so everyone can see”), music schedule, and cake. Ryan flew in Amanda’s favorite makeup artist and hair stylist.

While it might be easy to assume Amanda was a bridezilla in the making, Ryan was grateful for her unwitting help—and he followed her instructions to the letter.

He started with whisking her away to his dream wedding city, Miami, where he proposed at the site of the ceremony right before it took place—just what Amanda had always fantasized about.

The entire half-hour personal documentary of “The Surprise Wedding” comes complete with tales of love at first sight and Ryan Leak’s “recon work” on Pinterest.

You can also see the harrowing saga of how Ryan nearly lost track of his fiancee-and-bride-to-be right before the wedding, the first time Ryan said those three little words, and the hilarious way he actually broke the news to her that she was in the middle of a proposal:

Although like every wedding, it had its hiccups—there was no way Pinterest could have prepared them for a ceremony taking place in the middle of a tropical storm—Amanda got her dream moment. And so did Ryan.

“Your world just stops,” he said. “You don’t see anything but her.”

And in the end, the happy couple added 40 more pins to their fantasy wedding board.