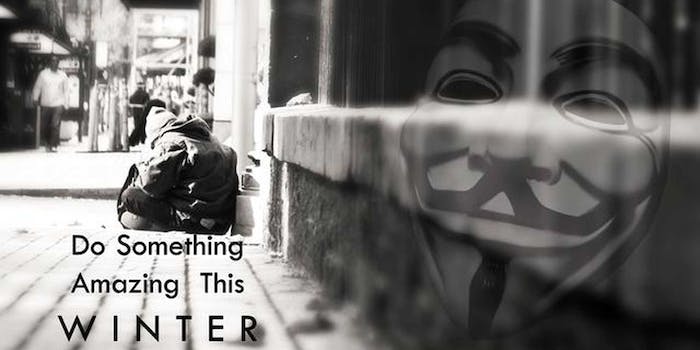 Anonymous is helping the "anonymous" masses.

“Do something amazing this winter… that’s the point.”

So said the administrator of @OpSafeWinter, the Twitter account heading up public relations for Anonymous’ most ambitious project for 2013 and 2014. We spoke to the Anonymous member via Twitter direct message for an exclusive interview on the umbrella project dubbed #OpSafeWinter. The goal is to get Anons and “civilians” out into the streets all over the world to save lives by giving the homeless and the critically poor the tools they need to survive at least one more season.

Because it is an international operation, including operatives on both sides of the Equator, the “winter” of the title continues all year long, switching hemispheres at the equinox. They will, essentially, never run out of winter. As New England faces the wrath of Hercules, Anonymous lines up to fight back with sleeping bags, mittens, and hot meals.

The operation was announced in a Pastebin November 7, when it became apparent that this season would bring some truly cruel weather to North America, Europe, and Asia. It quickly gained popularity among Anons, many of whom have been itching to get back into the streets for some direct, and positive, action. This kind of do-gooder op is problematic for some older Anons, who remember the days when it was all done with keyboards for the lulz; they call this “moralfagging” with all the contempt they can muster, but since 2008, when Anonymous went up against Scientology in OpChanology, moralfagging has been an important part of the fractious collective.

It can also be highly effective. While actually eliminating homelessness is a problem even Anonymous can’t tackle with confidence, making sure some people have food, warm clothes, and some basic tools like flashlights is the kind of thing that appeals to a very wide swathe of the population. Indeed, in our interview OpSafeWinter made it clear that one doesn’t need to be a part of Anonymous to participate and support.

Friday, for example, everyone in New York, Anon or not, was invited to participate in a potluck at 60 Wall Street at 6:30pm, and Occupy was one of the groups supporting the event. OpSafeWinter not only works directly with some organizations, but also just goes ahead and RT’s and spreads the word when it becomes aware of similar efforts by other groups. As well, it incorporates many pre-existing localized Ops.

There are only 12 countries officially involved, but as support grows, the paperwork falls behind. “Thats not final number because we are adding twitter accounts with local initiatives regularly every day, about 80+ locations for now. Portland is doing epic things, as [are] Anon UK based activists.” The UK arm of the op is one of the most active, and one of the first to get involved. Almost a year ago this video of Anonymous Nottingham encountering a homeless man went viral, and almost certainly helped inspire the birth of the current operation.

FoodNotBombs worked with Occupy two years ago, and now Anonymous is helping to publicize their efforts through this Op.

We asked what regular people could do to help without donning a mask. OpSafeWinter replied, “What is asked: warm clothes, gloves, sleeping bags, food. Also individual actions. Even if one person see some homeless person on street, not to bypass him but to stand, speak and show compassion and (if is possible) to give something as donation to that person. That means much.”

“USA activists are trying to do pressure on cities where feeding of homeless is banned. That`s not compassion.” He also cited Portland, Oregon, as the “shining star” of the Op; Portland has, of course, a long history of activism. It also has one of the milder climates in the continental U.S. at that latitude, which is fortunate for its homeless population.

While the operation has no hacking component, deliberately avoiding controversy, some of the ops under the umbrella have gone rogue. “Brazil anons did defaces for OpNatal (OpXMAS). Brazil deface[d] the Prefeitura Municipal de Gastão Vidigal website.” That is a government site that was at the time touting improvements to the social safety net, the one whose shortcomings Anons were taking to the streets to rectify. A group called TeamCrashers took responsibility for the deface.

Interestingly, Black Bloc, the bogeymen of the activist movement with a reputation for random physical violence and government infiltration, actively support OpSafeWinter and even handed out toys to children in Sao Paulo. “In Brazil BlackBloc also supports op as Occupy is doing in USA somehow. I like when Black Bloc shared gifts to kids in Sao Paolo for Xmas.” While the debate about whether Black Bloc is a group or a tactic rages on, the same could once have been said for Anonymous.

If Anonymous can turn Black Bloc into Santa, what can’t they do?

Correction: The original version of this article misstated the name of one of the participating organizations, WeSayNoClothing. This version has been corrected to reflect the accurate name.