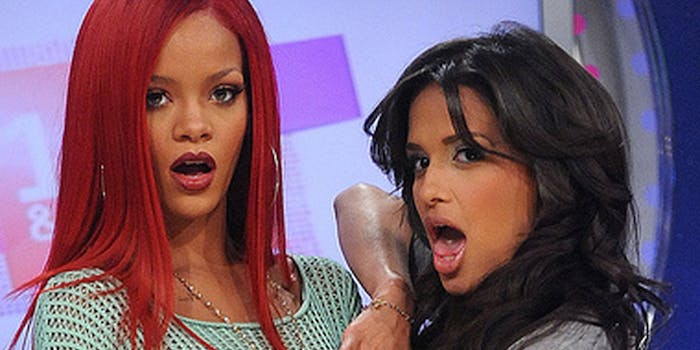 The woman is the first to be fined for illegal downloading under New Zealand's "Three Strikes" law.

New Zealand, which in 2011 instituted a “graduated response” system to deal with online copyright infringement—in some ways similar to the one about to hit most Americans—has fined its first pirate.

The charge? $616.57, for uploading the same Rihanna song twice, as well as one by Hot Chelle Rae, a pop group from Nashville. The money was awarded to the claimant, the Recording Industry Association of New Zealand (RIANZ), a sister organization of the Recording Industry Association of America (RIAA), the bane of many Internet activists in the U.S.

The pirate, identified by court decision only as female from NZ, is the first to be successfully charged under the country’s “three strikes” law. That means she’s thought to have pirated thrice, despite receiving a warning after the first two times. In October, the RIANZ dropped charges against a different woman after it became clear she didn’t even know what filesharing was.

From her testimony, it seems the convicted woman didn’t have much of a sense, either: As noted by the court, she refers only to downloading a single song. She seemed unaware that the default settings on program she used, uTorrent, simultaneously uploads files as it downloads them.

The woman admitted to illegally downloading the Rihanna song, but said that the repeat was caused by confusion with her computer, apparently unaware that UTorrent was still uploading the song. She denied that she or anyone in her household ever downloaded the Hot Chelle Rae song. From her written testimony:

The first song downloaded was a song called man down by rihanna. I accept responsibility for this. I downloaded this song unaware that in doing so from this site was illegal. When this song was downloaded to my computer, a whole utorrent program downloaded on it said that the song was still downloading and maybe that caused the song to register twice as it being downloaded? I’m unsure if this is possible or not but I don’t know why it shows that I would try to download the same song twice.

I kept receiving a pop up notice saying it seems like utorrent is already running but not responding, please close all utorrent processes and try again … I figured out how to delete the song that was still trying to download but still couldn’t figure out how to delete the whole program until just recently when I got someone to look at it as after I received the letter, I assumed having this program on my computer was causing the warning regarding downloading?

New Zealand is not alone in having a graduated response system with questionable outcomes.

The flagship for “three strikes” copyright enforcement systems, France’s HADOPI, has been a source of consistent controversy, in part because it allows the French government to completely shut off Internet access to convicted users. In September HADOPI convicted its first pirate, a 40-year-old man who blamed his estranged wife. Whether by coincidence or by particular targeting from record companies, they nabbed him for downloading Rihanna, too. The man was charged €150 ($193 USD).

The U.S.’s impending Copyright Alerts System (CAS), unscheduled but planned for “early 2013,” is in many ways similar to HADOPI and the New Zealand system. It won’t lead to actually shutting customers’ connections down completely, though it can lead to choking their connection speeds to a crawl. And like those systems, they punish the person whose name is on the Internet connection, not necessarily the actual pirate, in hopes of increasing users’ accountability.

Unlike those two, though, it’s not a law; it’s an agreement between AT&T, Cablevision, Comcast, Time Warner, and Verizon, and so it only affects customers of those companies.