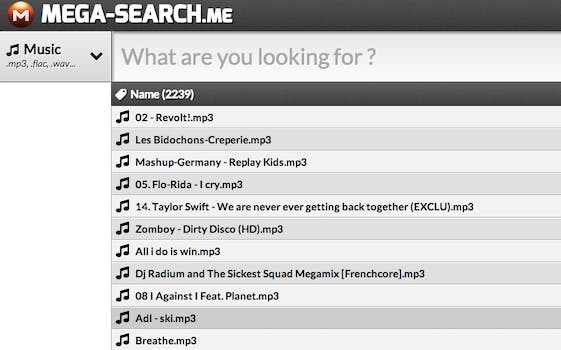 That didn't take long. Mega, the new "unstoppable" yet heavily criticized file-locker followup to MegaUpload, has a new fan.

That didn’t take long. Mega, the new “unstoppable” yet heavily criticized file-locker followup to MegaUpload, has a new fan. But Mega, which is clearly trying to present itself as a lawful operation, isn’t reciprocating.

Mega-Search.me is a new, super-sleek way to easily, incremenentally (think Google Instant) search for popular pirated content hosted on Mega. Users can, then immediately download it, for free.

And Mega-Search would certainly like you to associate their pirate engine with Mega, which has taken pains to present its new site as legitimate after federal agents raided MegaUpload in 2012. Not only is it a dedicated search engine only for pirated content on Mega, it even uses Mega’s logo, a red sphere with an M on it, as its own.

It’s unclear exactly who’s behind Mega-Search, which didn’t immediately respond to the Daily Dot’s request for comment. It established its Facebook and Twitter accounts on Jan. 24, and most of its social media content is written in French, though there’s plenty in English, too. The .me domain refers to Montenegro, presumably chosen because it’d be more difficult to shut down such a domain for copyright infringement.

Unfortunately for Mega-Search, its affection for Mega is one-way. A Mega representative disavowed the search site to the Daily Dot, stating “We are not affiliated with that site nor do we know who is running it.”

The Daily Dot attempted to verify that Mega-Search works, careful to only download mp3s with no artistic value whatsoever, like songs by Pitbull and Coldplay. But each was met with the same error message that indicated the file had either been deleted or taken down for piracy.

Indeed, Thursday morning, Mega-Search began complaining of a Mega crackdown. “MEGA just deleted all our links without checking their contents,” Mega-Search posted to its Facebook wall. It indicated it might already be over for the search engine: “I think mega will delete all the future links too,” it added.

“#Mega is now hosting almost 50 million files. Only 0.001% have been taken down by content owners,” he claimed via Twitter Tuesday morning. “MASSIVE non-infringing use!”

So what’s the takeaway? For one, it’s an indication that Mega’s operation takes copyright infringement seriously, and is ready to take down infringing content that users upload to the site.

Whether MegaUpload actually responded quickly and in good faith whenever a copyright holder complained to them is central to its ongoing case with the U.S. government, a lawyer with the Electronic Frontier Foundation who’s advising on the case has previously told the Daily Dot. If feds want to similarly take down Mega in the future, their case will either be seriously hampered or helped by how fully Mega complies with those notices.

And who knows? Maybe Mega-Search will rebound from this round of takedowns. Sites sometimes do that.