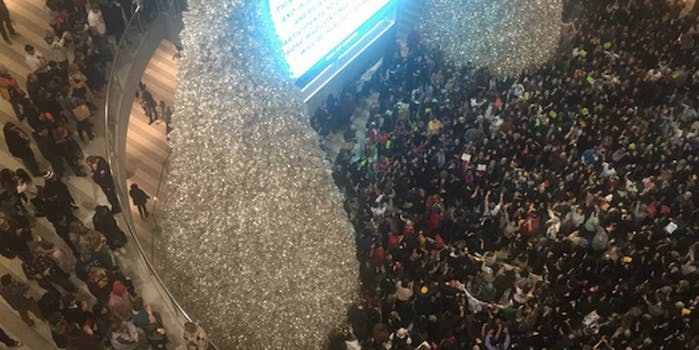 #BlackLivesMatter is shutting down the Mall of America

The action was planned to coincide with a major holiday shopping day.

“Join us at the Mall of America in solidarity with #BlackLivesMatter,” read a Facebook invitation to protest a year of police brutality this afternoon at the massive Bloomington, Minn., shopping center that bills itself as “the place for fun in your life.”

“It will surely be a #BlackChristmas,” organizers promised.

Crowd gathers in the Mall of America rotunda. pic.twitter.com/HVZXgFH6oi

Some 3,200 people RSVP’d, and the crowd that turned out succeeded in blocking a large rotunda on the east side of the mall before local police in riot gear forced them into another area. Orwellian warnings to disperse, which probably had something to do with “Super Saturday” being one of the biggest shopping days of the year, appeared on the mall’s digital billboards—these messages were also read over a loudspeaker.

An actual photo from from the protest at Mall of America, not footage of a crappy holiday themed sequel to 1984. pic.twitter.com/cR5j9QDKvk

Protest seems to be spilling out of the rotunda area toward Santas workshop and Barnes and Noble. pic.twitter.com/AKcf0HEq14

.@bareMinerals I'm concerned there are riot police outside your store right now at @mallofamerica. #Ferguson pic.twitter.com/xJsSoBcPGa

This doesn’t appear to be an isolated incident: Similar protests have been taking place in other parts of the country today.

No arrests, violence, or looting has been reported, though a fair amount of consumerism has been disrupted. The Mall of America’s Twitter recount reported and apologized for the “inconvenience” of a partial shutdown.

@Danikelvie No need for concern. There is an unauthorized protest occurring. Security is handling it and things should open up again soon.

@virgiltexas This is not a sanctioned protest. The mall is private property and unauthorized protests or demonstrations are not allowed.

@boymonster Areas of the mall are temporarily closed for the safety of our guests due to an unauthorized protest. The majority remain open.

@HannahBellich We apologize for the inconvenience. For the safety of our guests we are closing certain areas due to an unauthorized protest.

“We expect the mall security to search people coming in and to stop large groups so we advise arriving without signs and to enter individually or in small groups,” the protest’s Facebook page advised. “Our legal number in case of arrest or violation of your rights is: 612-436-3664.”

Also included was a link to the public bail fund for Black Lives Matter Minneapolis. Who knows—they may be needing it.