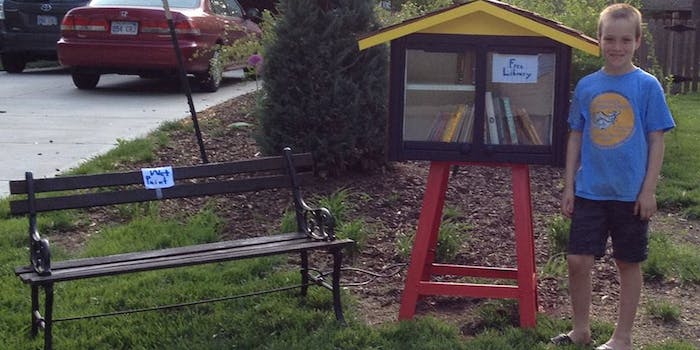 Publicly situated boxes where people can pick up books based on the “take one, return one” policy—widely known as Little Free Libraries—are something to which only the most embittered anti-literacy stalwarts could object. Sadly, that’s just who runs the city of Leawood, Kan.

Local authorities there, apparently having nothing better to do, cracked down on an unassuming Little Free Library run by 9-year-old bookworm Spencer Collins, alerting his family in a letter that the cabinet violated an ordinance prohibiting “free-standing” structures in the front yards of single-family homes. Collins had built the library, with the help of his father and grandfather, as a Mother’s Day gift for his mom, an elementary school teacher who had fallen in love with the idea.


The Collins family has removed the offending beacon of community-minded readership in order to avoid a fine from the city, which hasn’t budged from its Grinch-like position: “[The law] applies to any structure, so we aren’t targeting the little libraries. You couldn’t put a bookcase out there, or a couch out there, or any items like that,” Leawood director of community development Richard Coleman told Fox, comparing the Collins’ lovingly curated library to actual trash.


The good news? Spencer will fight the misapplied ordinance in a city council meeting. “I want them to change the law,” he said. “That’s my main thought. I just don’t like it. I think it’s unfair because it’s really good to the community.” He rightly noted that the library provided a great way to “get into reading, get to know your neighbors, and just meet new people, make friends.”

You can keep up with the legal battle by way of a Facebook page which has already attracted generous support, and contact members of Leawood’s municipal government directly, ideally to read aloud to them from A Wrinkle in Time. In an age where adults call the police on kids for giving books away at a book giveaway, cancel summer reading programs because somebody might learn something, or seek to dismiss, ban, and ridicule important work, it’s vital that we remind kids of literature’s democratizing effect—as well as their duty to uphold it.