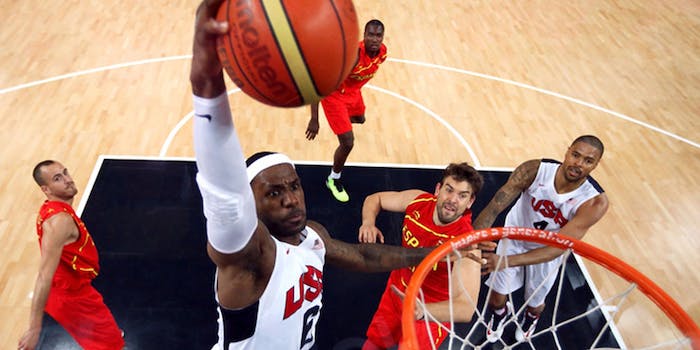 Fans offer LeBron James $1 million to save the dunk contest

One NBA fan thinks only LeBron James can bring the annual dunk contest back to its former glory, so he's trying to raise $1 million to convince the star to participate.

“It’s not me,” he said. “I’m not a dunk contest type of guy. I’m an in-game dunker. I kind of improvise during the game.”

But if there were a cash prize for the winner, like, say, a million dollars?

“Then I’d reconsider. Wouldn’t you?”

That’s the idea behind “Convince LeBron to Enter Dunk Contest,” a new GoFundMe campaign created by Chris Thomas. The 28-year-old is hoping to raise $1 million to entice the Miami Heat to finally entered a contest he’s ignored since he first entered the NBA in 2003.

On his fundraising page, Thomas reminisces about the glorious contests of yore: “Jordan ending his epic battle against Dominique Wilkins with an iconic free throw line dunk, [Vince Carter]’s 360 windmill that shut the contest down, Isaiah Rider introducing the world to the East Bay Funk Dunk,” and others.

But, according to Thomas, the contest has lost its way in the past couple of years.

“[Somewhere] along the line the Dunk Contest has morphed into an event dominated by corporate sponsors (ahem Kia), sub-par talent and gimmicky dunks,” he writs. “No offense to Chase Budinger, but last year’s Dunk Contest showcased Chase Budinger.”

All is not lost, however. Thomas believes that the contest can be glorious once again if James participates, and he suspects that appealing to the superstar’s philanthropic nature might be the best approach.

“Let’s raise enough money to entice LeBron to enter the 2013 Dunk Contest,” he pleads. “But instead of the money going to him, it will go to his charity, the LeBron James Family Foundation.”

As of this writing, the crowdfunding campaign has raised $3,670, well short of the lofty goal. And even if Thomas is able to raise $1 million, there’s no guarantee that James will enter the contest.

If that were to happen—if James were to deprive the world of his freakish talent for yet another year—Thomas promises to refund all the money.

“If this project is unsuccessful, all donations, including fees, will be refunded through WePay within 90 days of the date of donation.  Under this scenario, if you donate $10, you will get all of your $10 back.”

The Daily Dot reached out to Thomas on multiple occasions, but he did not return our requests for comment.