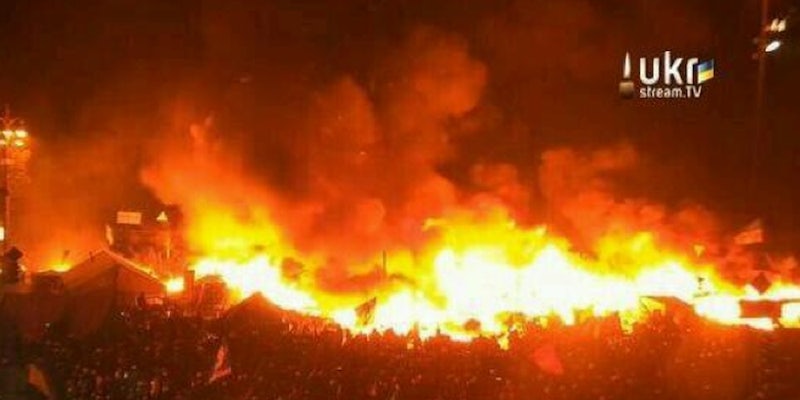 Kiev in flames as 200,000 watch protests on livestream

EuroMaidan, the 3-month-old protests against President Viktor F. Yanukovich in Kiev, Ukraine, took a turn for the violent Tuesday night.

EuroMaidan, the 3-month-old protests against President Viktor F. Yanukovich in Kiev, Ukraine, took a turn for the violent Tuesday night. Nine protesters have been reported dead and 200 are injured as the capital is engulfed in flames.

More than 200,000 viewers are tuning in at any given second.

The scene was described as “mayhem” as riot police aggressively attempted to remove protesters in Independence Square. Protesters threw rocks and fireworks at police as vehicles broke down and burst into flames, trapping security officers inside and “prompting desperate rescue efforts from their colleagues,” reports the New York Times.

A sound system that had been filling the square with speeches and protest songs for weeks temporarily went down. Protesters have restored the system, and the volume is up once again in the center of Kiev. The incredible scene of flames and flag-waving has a blaring soundtrack alternating between beautiful music and ferocious voices.

“We see that this regime started shooting at people again. They want to drown Ukraine in blood,” Arseniy Yatseniuk, a prominent opposition leader, shouted. “We won’t react on a single one of their provocations. But we won’t make any single step back from here, from this Maidan.”

Protesters have begun translating speeches into English with the help of a self-identified Belgian soldier. The words “civil war” were used, citing global examples of governments trampling civilians for their own gain.

This is the bloodiest day of violence so far and the death toll “looked certain to rise as the battles raged.”

Update: 3 police officers have also been reported killed, according to Ukraine’s Interior Ministry.